The Very Best Reminder of Why We’re Doing This

About a month ago I got a text message from the guidance counselor at one of the schools with which STOKED works. It’s easy to get lost in the day-to-day details of biking from Point A to Point B, but the bigger goal of what we’re doing and why we’re doing sticks with us every day. It’s not about that Point A and Point B, it’s about everything in between: the local roads, the people, the random conversations and explanations of what we’re doing, the local flavors, the hills, and what we can take away from every place we go.

This is us Living Big, in the unusual or unorthodox way that we’re doing it. And we’re working continuously to create that opportunity for the youth of STOKED, where I used to work and a program that is very near and dear to me. Our fundraising effort is currently just below $5,000, which means that we’ve nearly created 10 scholarships for the future class of STOKED and high school graduates. We are so excited about that! But still have a very long way to go of achieving our goal of creating 100 scholarships. 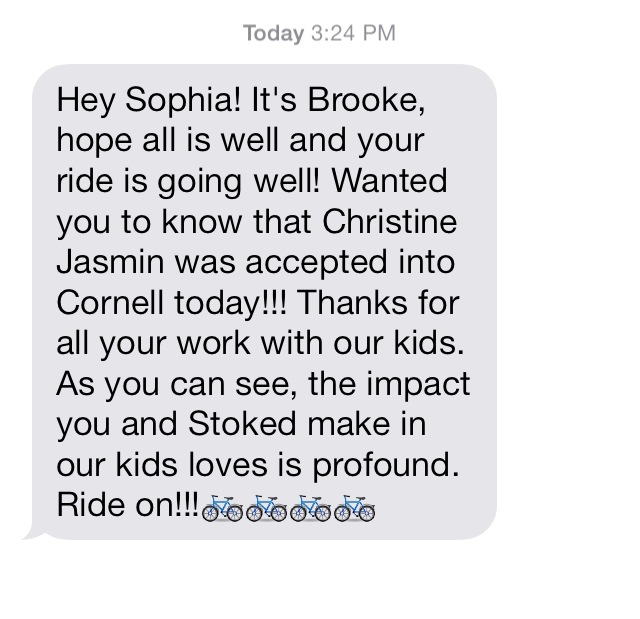 Christine is a special kid and one that I really enjoyed working with at STOKED. For three years I watched her push herself, learn new skills, meet professionals, put her best foot forward. I taught her how to swim and was there when she surfed her first wave in Far Rockaway and gave her a high five when she told me how great she felt because of it. She’s going big places and I’m glad to have had the opportunity to help her get there in whatever small way I could!

Getting this message was a simple reminder of why I loved working for STOKED so much, and why I’m so excited to be working to create this scholarship program. Here’s to making more dreams of living big come true!

My sister, Marisa, has lived in Atlanta for about 10 years and I had somehow never managed to come visit. Ridiculous, but we were excited to be able to schedule in a few days to see what she does and where she does it! Here are the excellent ways we filled our 3 days in Atlanta: 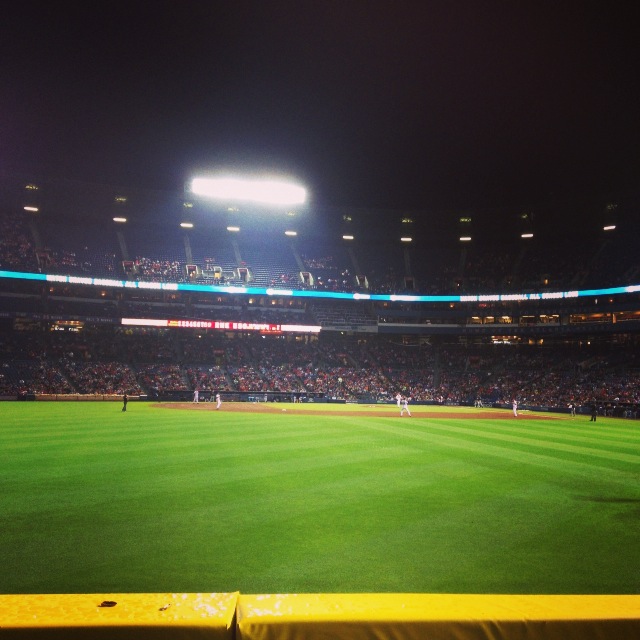 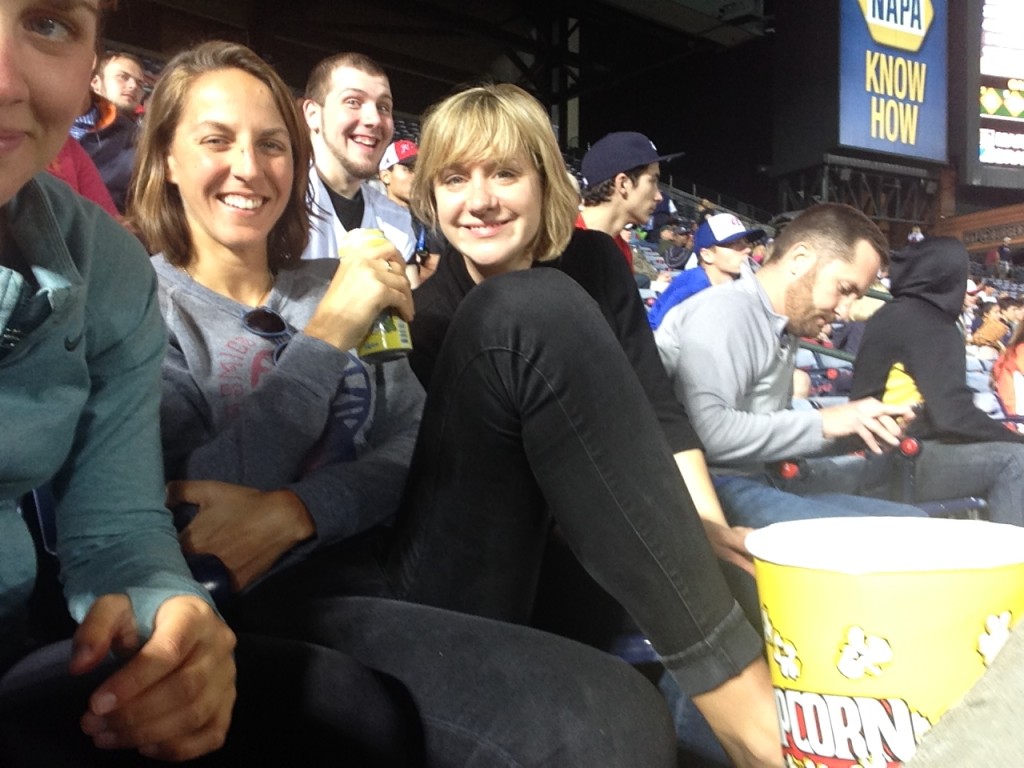 Popcorn, beer and an impressive photo bomb in back 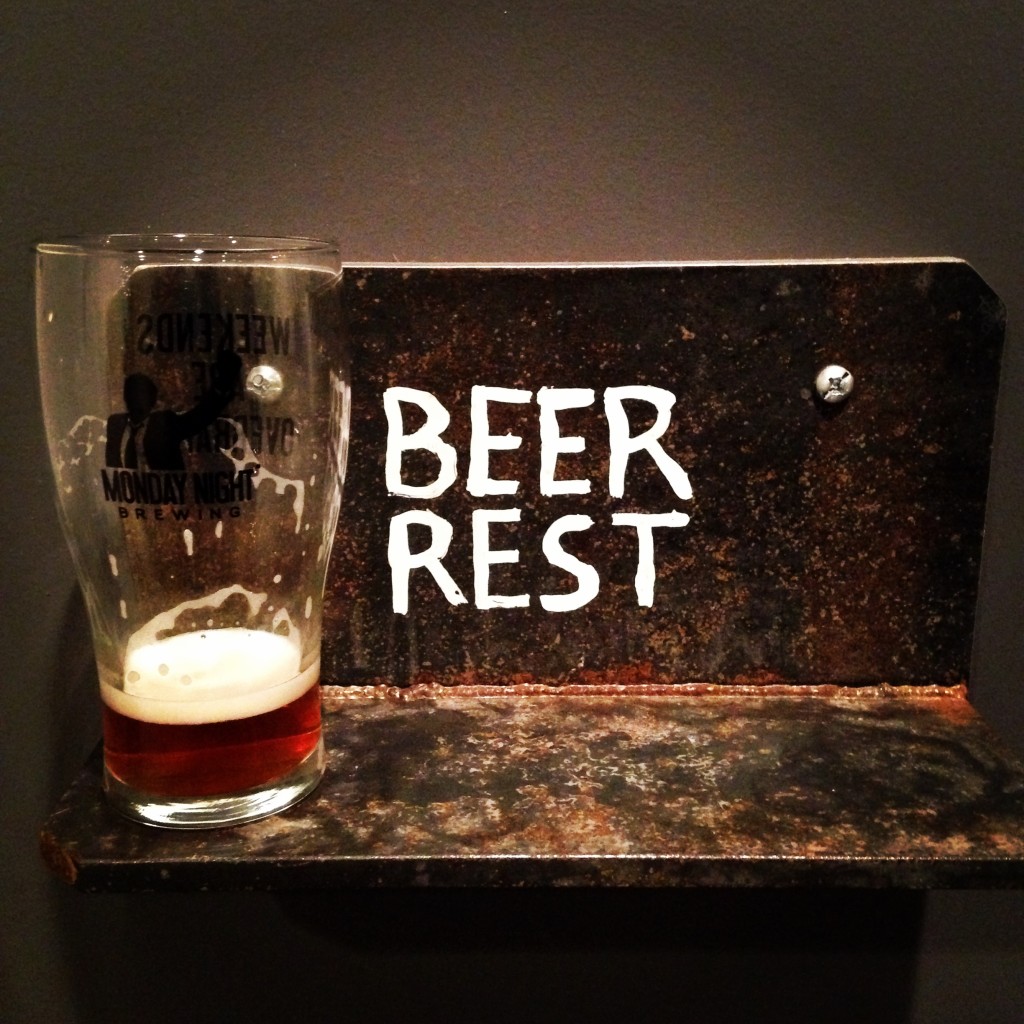 All in all it was a grand few days, we had a great time exploring all of Atlanta’s neighborhoods and getting to see Marisa’s digs!
Apr 25, 2014

This weekend we have a wedding to go to in Peachtree City, and my older sister lives in Atlanta, just 30 miles away. So we made our schedule to arrive in Peachtree City on Monday, leave our bikes at the bike shop to get some maintenance done, be picked up by my sister and hang in Atlanta for a few days before returning for the wedding! Mission: Accomplished. 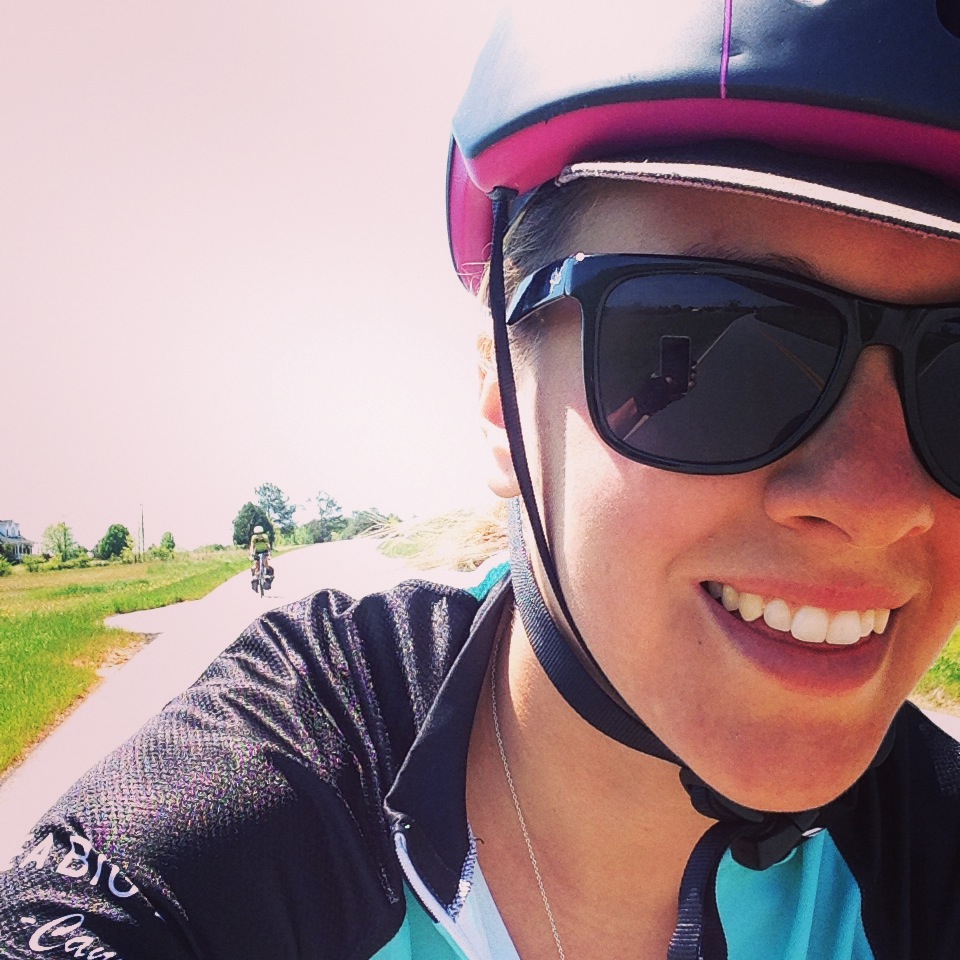 We only had 50 miles to ride, but having a hearty breakfast makes every difference in the world so we went into the town of Pine Mountain and did that. The daily special was another example of the benefits of small town dining: an enormous breakfast and unlimited coffee for $3.50. As always we stuck out like sore thumbs in our full body biking spandex outfits, so the other patrons asked us all about what we were doing. Everywhere we’ve gone, strangers are universally curious, kind, and send us off with genuine well wishes. This morning, we were sent off with our first foot-in-mouth quote: “Y’all don’t go and let yourselves be hit by cars now!” We laughed uncomfortably and got on our way.

Western Georgia is beautiful! And we had perfect weather to crank out the miles, and before 2pm we cruised into Peachtree City via local highways and the extensive golf cart pathway system. The guys at the bike shop were confused/curious about why we’d brought so much luggage into their shop, but promised to take good care of our beloved bikes and my sister arrived to whisk us away! It’s like dropping the kids off at the babysitters: no bike worries for many lovely days.

Another border crossing today! We woke up in Eufaula on Easter Sunday with a big day scheduled, but upsettingly no town where we would be able to get breakfast/coffee for at least 30 miles. We called the state park where we were and asked if they knew any local secrets to getting our caffeine fix and they responded “yes, we have an Easter brunch buffet in the lodge.” Already halfway out the park, we pulled a U-turn and went to work on that buffet.

When we finally finished eating and got on the road, the first 40 miles were tough – more big time rolling hills with long, steep uphills and downhills that were all too short. In these scenarios it’s actually pretty nice when we’re in the middle of the forest, like we were this day, because at least we can get in a groove and just push the hills out. So that’s what we did, and 40 miles later we cruised into Columbus, GA, which means we crossed the border! 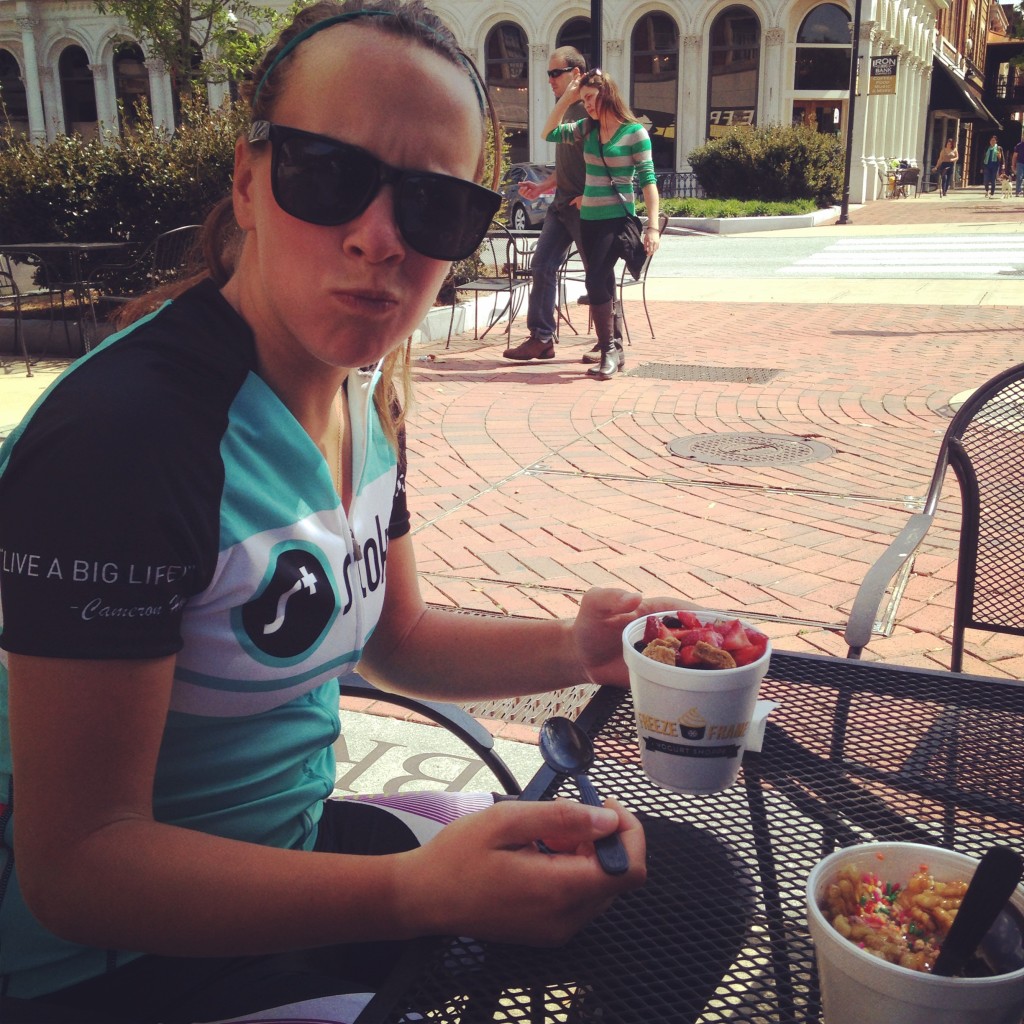 We stopped for some energy boosting frozen yogurt 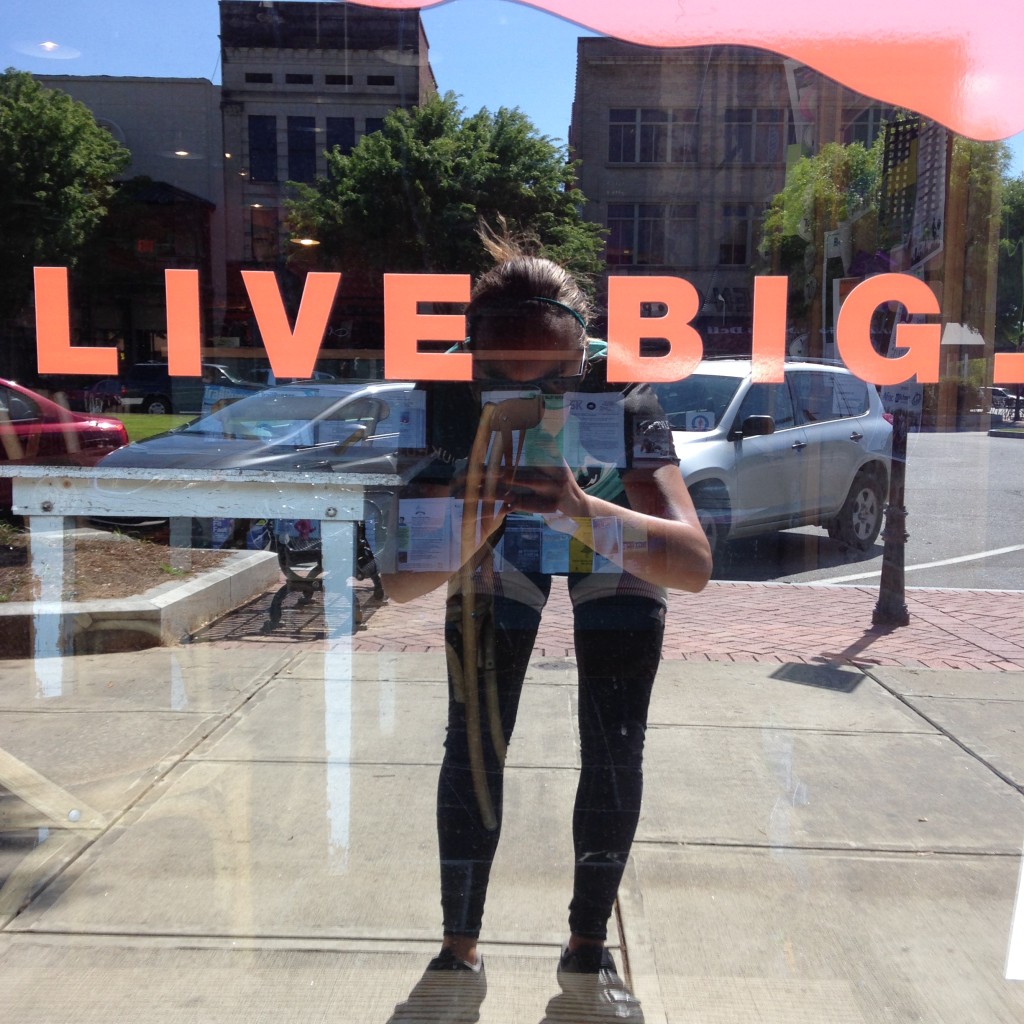 We really liked Columbus! It’s this cute town with a decent size and a small college, so it had some spring to its step especially when compared to other places we’d recently been. We actually considered stopping our day and just staying there – our frozen yogurt did a number on our motivation – but talked ourselves out of it and pressed on.

30 of the last 35 miles were lovely. Just lovely. The hills smoothed out some, we had a shoulder to ride on (inexplicably, the entire state of Alabama has rumble stripped each and every one of its shoulders, meaning we had to ride in the road with the cars, but upon crossing into Georgia we were sparred such moronic road planning), and we genuinely felt powered by our frozen yogurt! But oh MAN, we did not know that our campground for the night, in FDR State Park just outside of Pine Mountain, was at the top of a mountain. Holy smokes, the last 5 miles were brutal. We cranked our gearsets to the easiest possible wrung and just grinded those last few miles out. It was not fun and we were riding against dwindling sunlight, but we finally made it with about 20 minutes to spare. 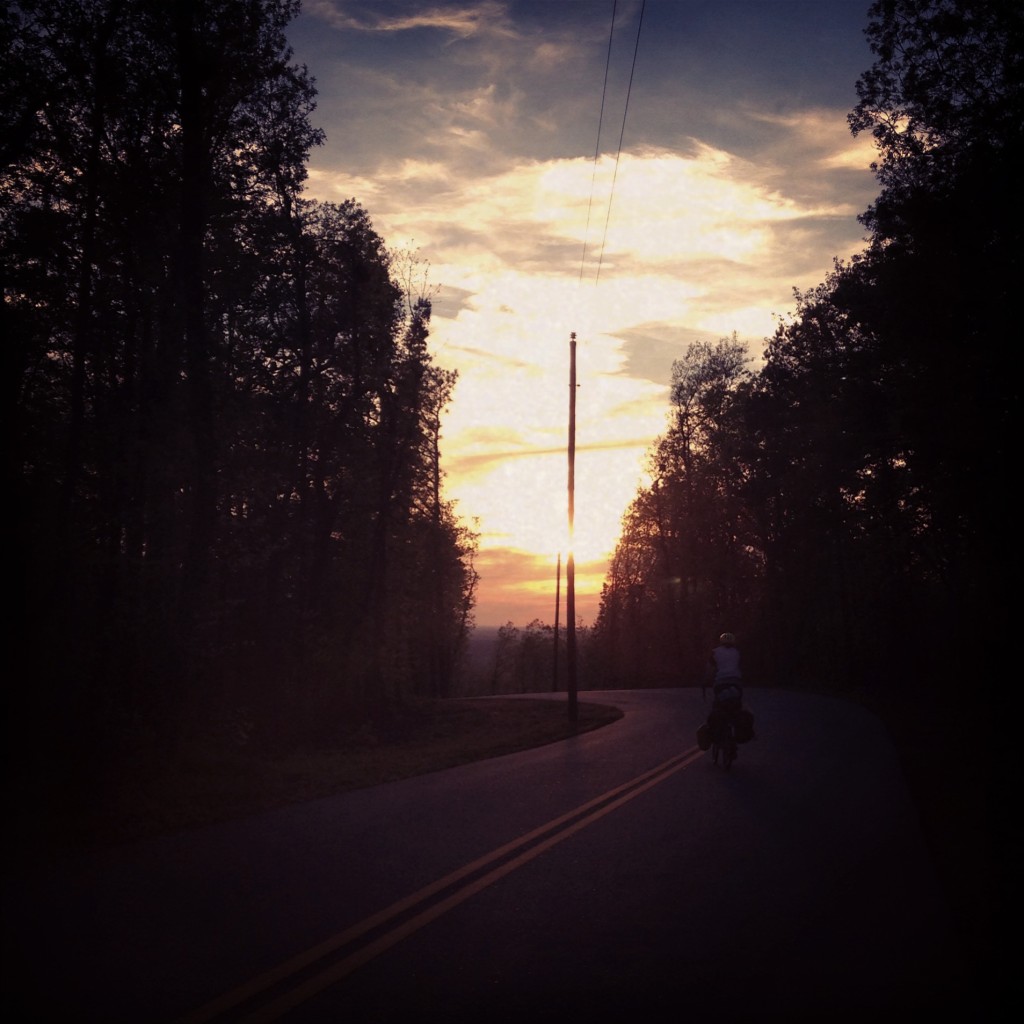 At the very top of the mountain

We KNEW we should have stayed at Pam and Guy’s house in Andalusia when we woke up the morning of the 18th, both because of the smell of homemade biscuits but also because it was raining, and was scheduled to do so all day. But because we had plans to get to Atlanta, we reluctantly headed out. 2 hours and 25 miles later, in steady-to-hard rain that soaked through our clothes, stiff winds and 52 degree weather, we shivered our way into a Burger King in Elba, AL to get some warm beverages. We were planning to make it another 55 miles, to another warm showers host, but as we sat there chugging coffees and hot chocolates and growing significantly colder, we started to formulate other plans. Then, Madeleine went from cold to freezing and shivering so much that she nearly vibrated right off her BK bench, and we heard our mothers’ voices in our heads saying “you’re going to catch a cold! Or pneumonia!” So, unimpressively, we decided there was no way in hell we were going to bike 5 more hours in the freezing rain and checked into the local motel, and spent the day and evening with nothing to do in Elba, Alabama. 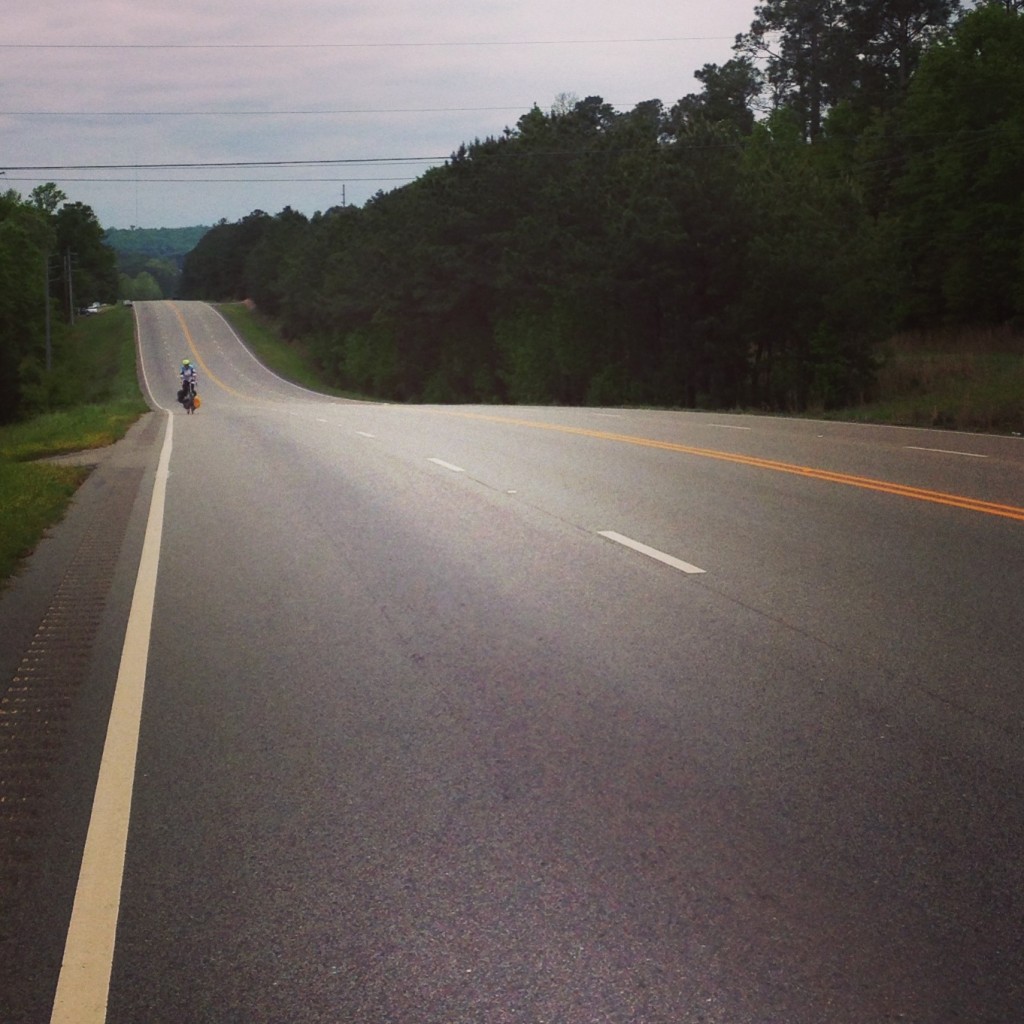 Some of those rolling hills

The next morning we had some moves to make to make up for the miles lost the day before, so up and out we went, happy to riding in the non-rain. We soon discovered that eastern Alabama has a hill country of its own! Who knew? Man, those rolling hills are no joke and made this day far harder than we expected. I think it was about 85 miles to Eufaula (we stayed in a state park just north of there), and it took us all day long with basically no breaks. 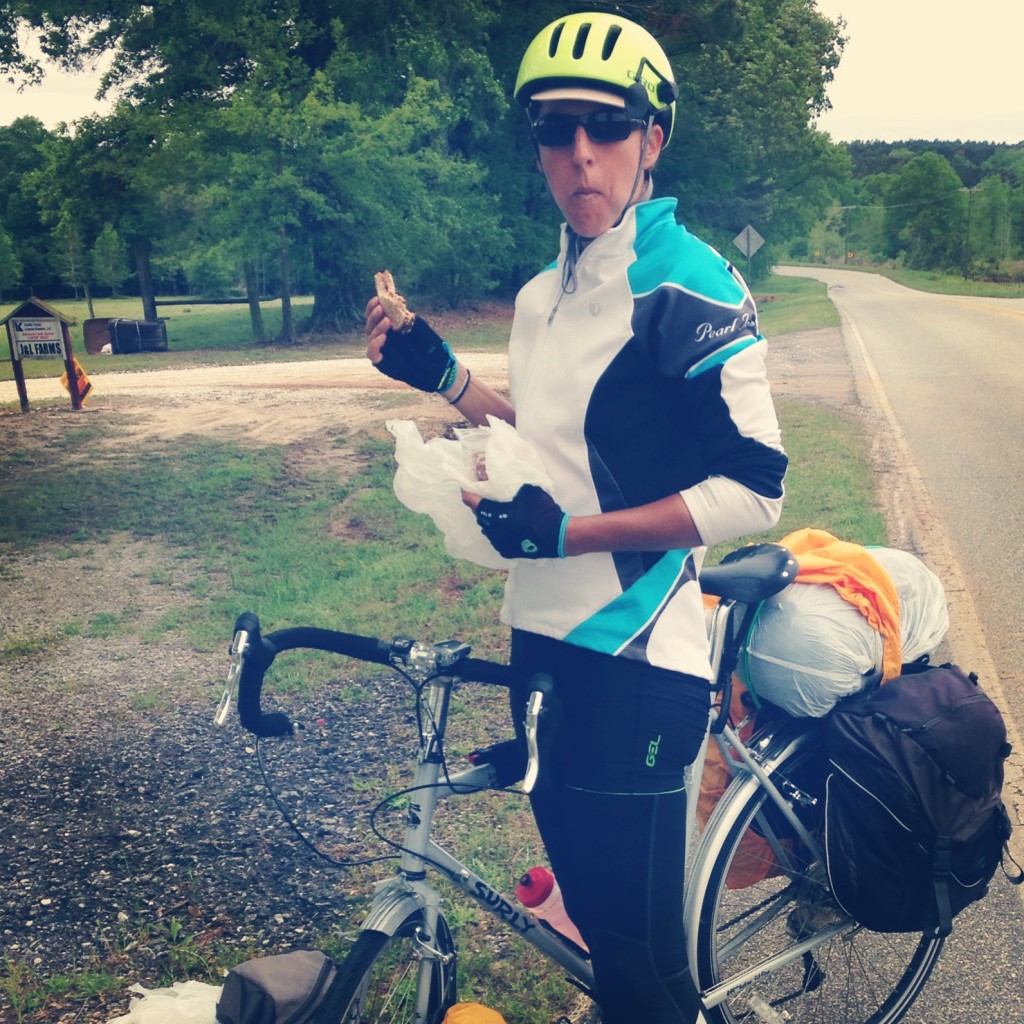 Mad stuffing a PB&J on the side of the road 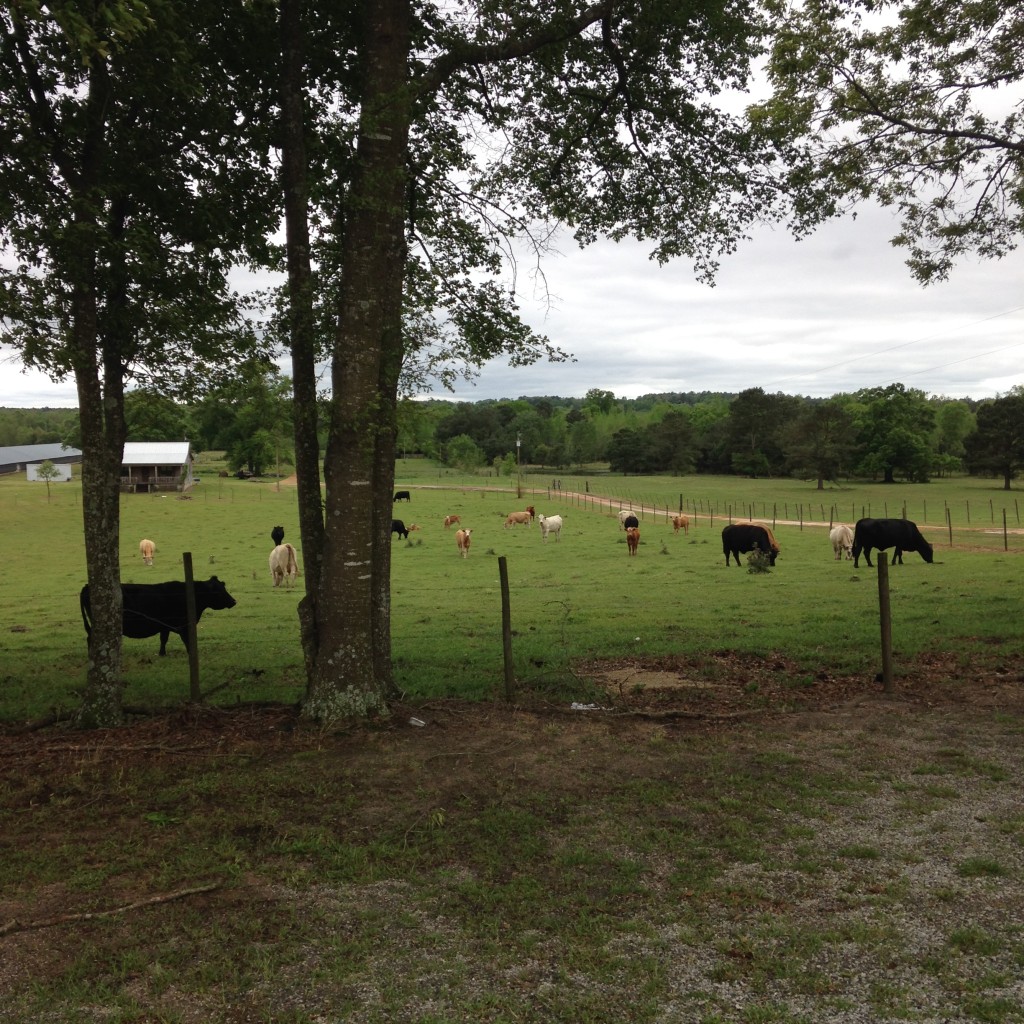 But it sure was pretty

We finally made it to camp, ate some soup and got some serious sleep after the long day!
1 2 3 4