During the night in Richards there was a big lightning storm and a ton of rain, so we were relieved to see that it had stopped by the time we were up and ready to go. We stopped at the one place in town for breakfast, since we had aspirations of going 90 miles and knew that a good breakfast would help us accomplish that. We walked in and a young guy fully clad in camouflage asked us before we sat down “Y’all know what you want?” Not being regulars we did not, but it was nice to be mistaken for one anyways. 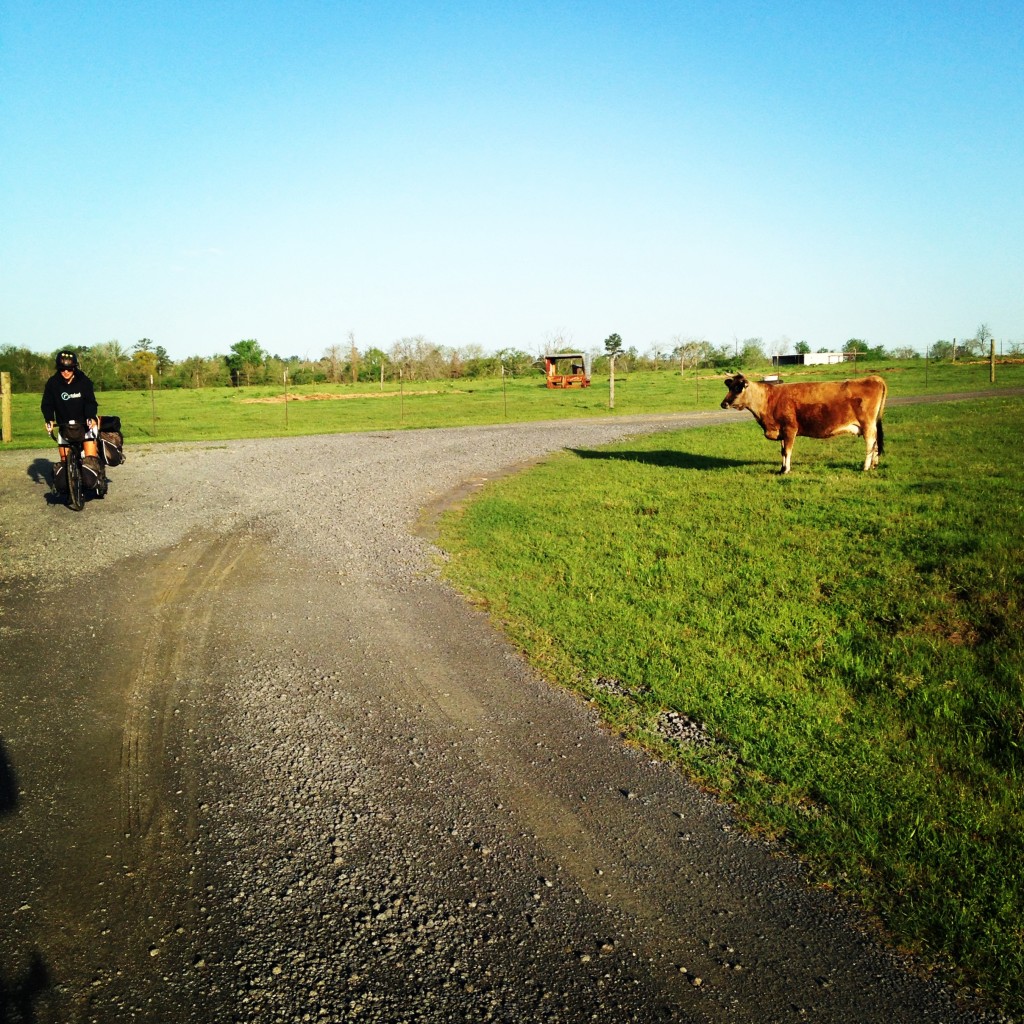 Leaving Richards, where we stayed on a cattle ranch

Soon thereafter we headed out, but something wasn’t sitting right with me and I wound up spending the day good and nauseous and therefore slowed us down a good bit. It wasn’t until later that day when we realized that the local water back in Richards was loaded with sulfur, including the cups of coffee I drank (whoops). We finished up Texas’s rolling hills and enjoyed the fact that they were flattening out, but because of my sulfur plague we only made it 60 miles, to just beyond Shepherd, TX. We rolled into the Shepherd Sanctuary campgrounds to find an eclectic series of cabins that looked straight out of Alice and Wonderland, a fire pit, and a dry place to camp. It was run by a woman named Peach, who was hosting her 30 year high school reunion (class size: 18 students) from the next town over, and was a rare liberal-minded, liberal politics gem who proceeded to feed us delicious soup with homegrown kale and a blackberry tart. We spent the evening chatting with her as well as three other cyclists, which is always a good opportunity to share battle stories. 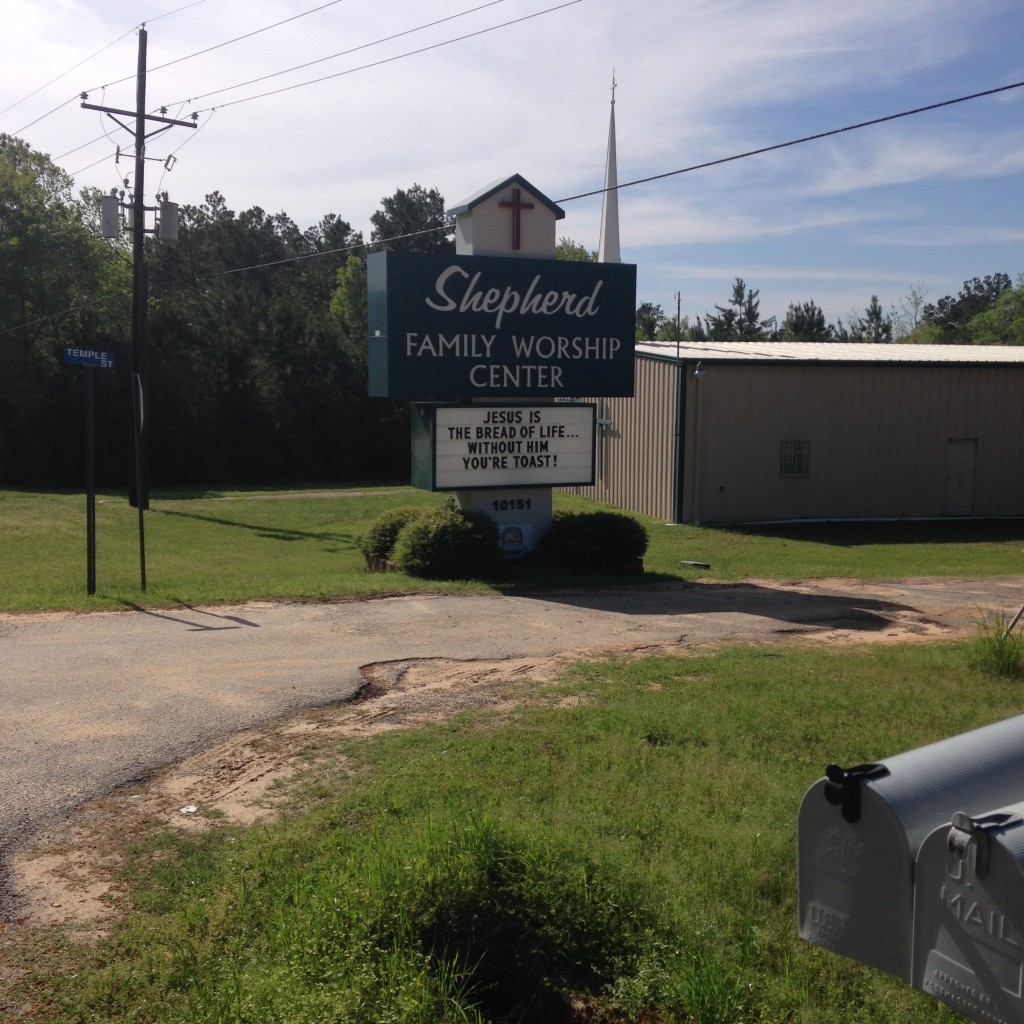 Somehow, we are still in Texas.

We found a lovely little coffee shop in La Grange this morning with delicious coffee and, mysteriously, free refills which we took full advantage of. It was clearly the only show in town because the joint was hopping with all sorts of locals. Among them was a guy who was super duper talkative. We learned many things about him including, but not limited to, that he was a youth minister in west Texas for a while and now has pictures of all his guns on his iPhone. Also, he said he’d been to California once and he liked it until he went to a gun shop and they wouldn’t let him even hold a gun because he didn’t have a valid state drivers license. It seemed weird to me that he would be just checking out a gun shop while on vacation but then it occurred to me that maybe people who are into guns do that, just for fun. Like how Sophie and I like to stop into local bike shops just for fun. Add it to the list of things we’ve learned on the road.

After our extended morning at the coffee shop we got a bit of a late start. We stopped not long after we started when we ran into the antique fair that apparently happens twice a year on the road heading into Round Top, TX. It is literally five miles of antiques. At least. It is crazy. And people really seem to get into it. They bring U-hauls to truck away all their goodies. Sophie misplaced her sunglasses this morning so we stopped when we saw a tent selling some. She picked up a pair of gangster shades and we continued on. 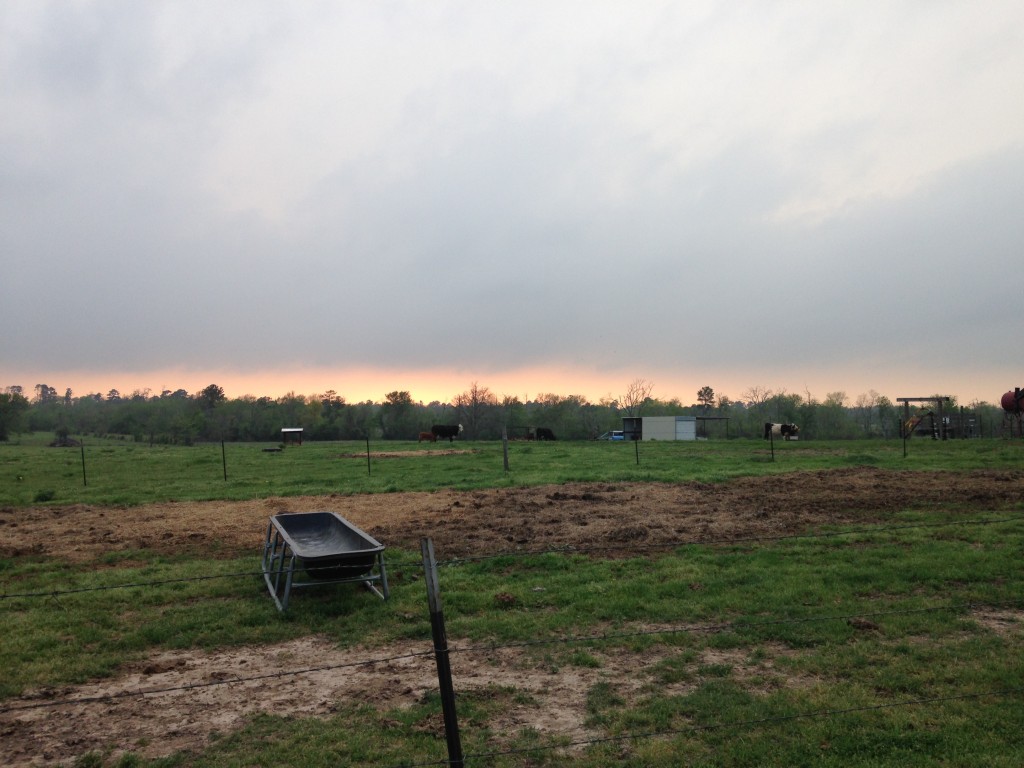 The roads were lined with endless ranches

For some reason we stopped a million times today and the day seemed interminable. When we were about 11 miles out from our intended destination a truck pulled over ahead of us and the driver got out and walked over to us. He asked where we were headed and where we planned to stay. Turned out, he owned the B&Bish-type-place we were planning to stay. This place is a working cattle ranch and the owners, Ernie and Doris, have built bunkhouses so travelers can stay. They allow camping, which we had intended to do, but it seemed like it was about to rain (which it did) so we opted to stay in one of the bunkhouses. It is awesome. We have matching twin beds with Harley Davidson sheets. We also did laundry and cooked a hot meal in the kitchen. It’s almost like we’re real people! There are six other cyclists here tonight which is great. 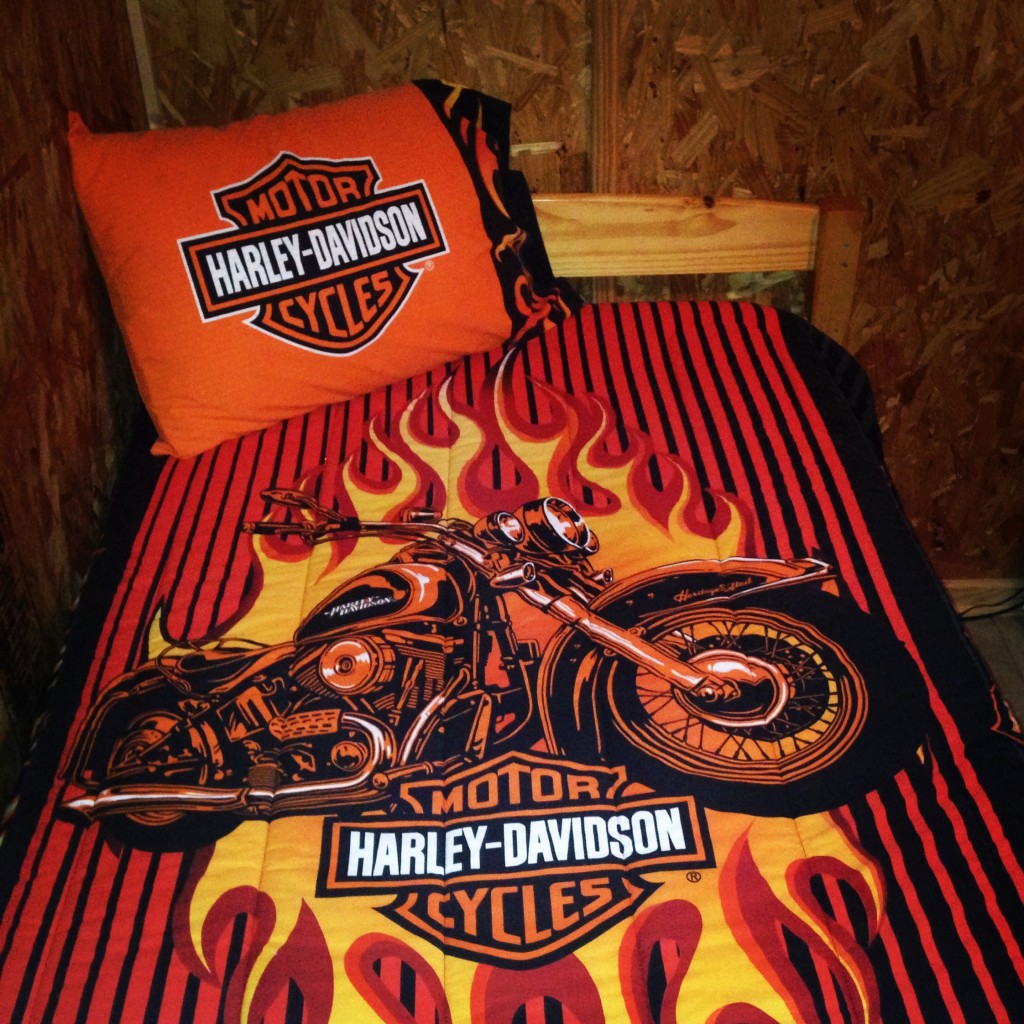 Head to toe in Harley gear

Maybe next time I write a post we will have somehow, some way, emerged from Texas.

It’s so confusing getting back into the swing of things after taking a few days off. The alarm went off so early this morning, but we packed up and hit the road out of our Austin airbnb around 8:30. Today my mom and Virginia were going to spend the day hanging out and then drive to La Grange, our destination, to get dinner and see what we look like after a day of biking. They carried all our bags, which was incredibly luxurious for us. 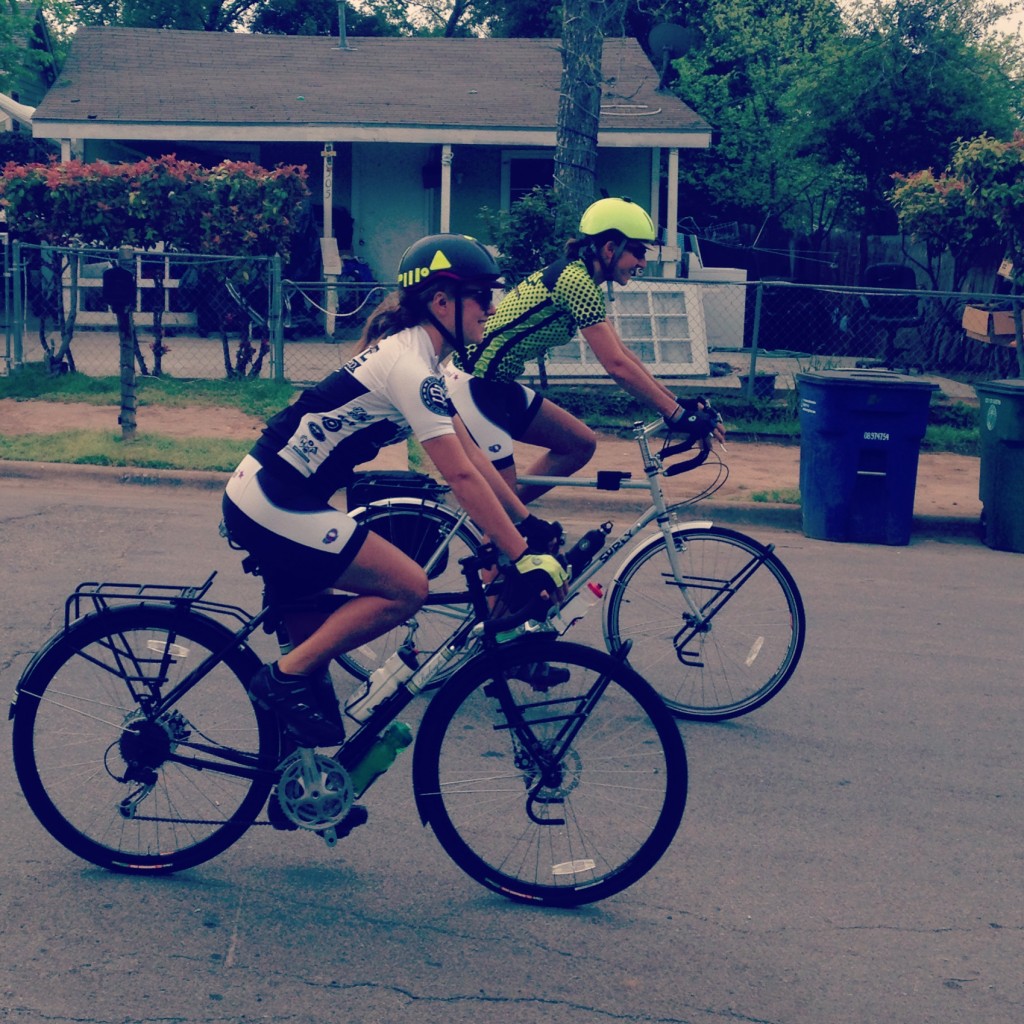 Rolling out considerably lighter than usual 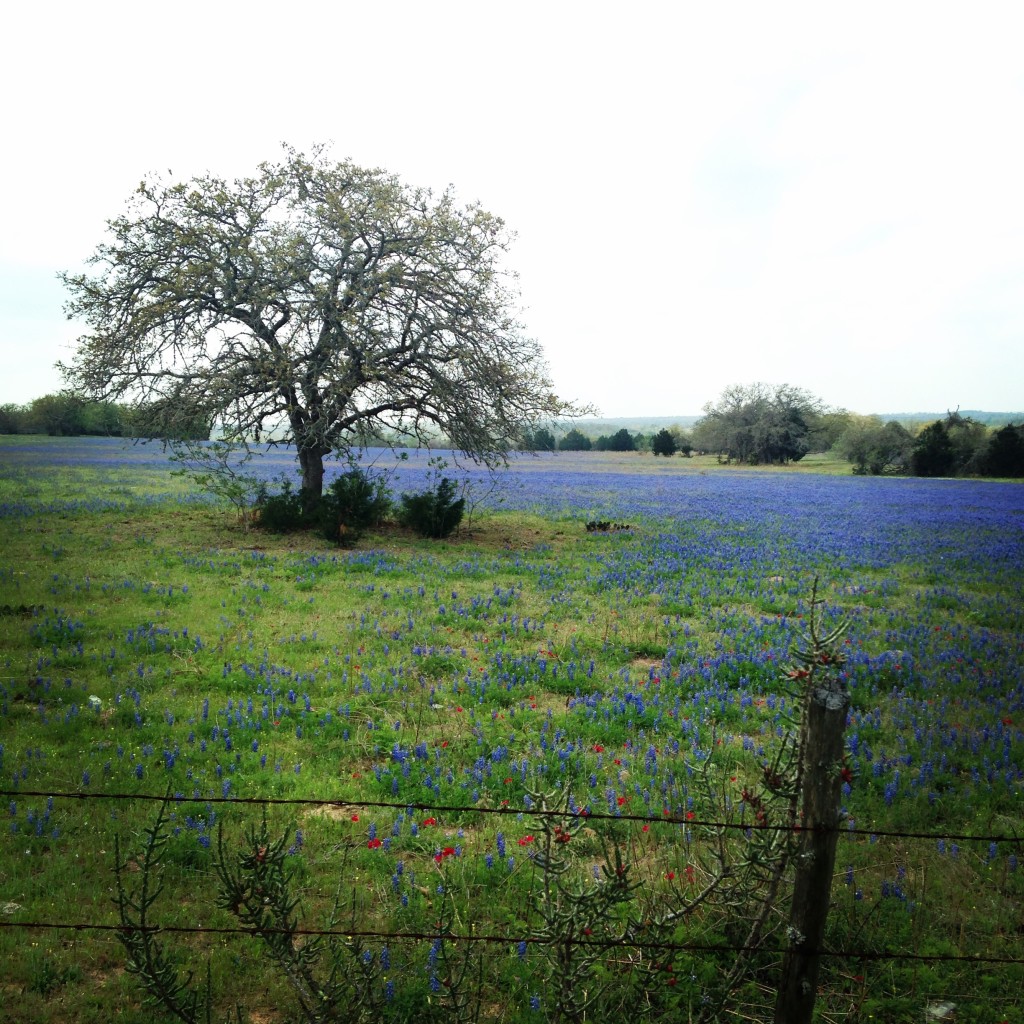 The first 25 miles or so were a dream. Once we cleared the outer Austin area, we were surrounded by fields of green grass, trees and wildflowers; it was the most nature we’ve seen since San Diego. One way there was a field of green grass and purply blue flowers, and on the other side the field was dotted with red and yellow flowers – much more exciting to look at all day than the desert. But sure enough the wind started whipping in our faces and the hills started, and we were extra glad to not be shlepping all of our stuff with us. Every day find ourselves wondering aloud, can the wind really keep doing this the whole way across the country? 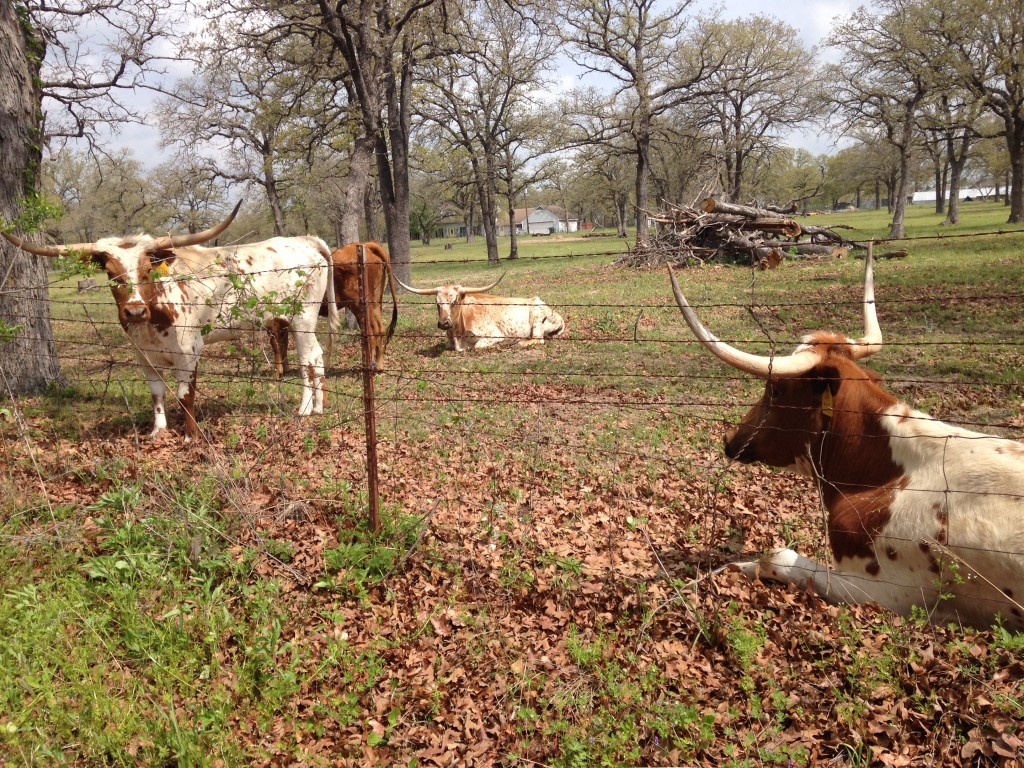 One of the many nature sightings today

We were in sour moods when our motherly visitors drove up along side, about 5 miles outside of town. They said they would go on ahead because there was a bakery with some Czech delicacy that we just had to try, so we met them at a cute little cafe in town where we each downed multiple iced teas and lemonades. They also brought us some seriously delicious BBQ from Salt Lick, which they’d had for lunch, and we all huddled at a picnic table for dinner and dessert. It was an excellent ending to a not-so-excellent day of biking!

Having a cobbler moment

Concerned Mother #1 (Mad’s mom, Karen) arrived first, followed shortly by Concerned Mother #2 (my mom), and we spent a few days exploring Austin, where none of us had been before. We were joined for part of it by Virginia, who I am somehow related to through various marriages (step-aunt-in-law?) and who is an Austin native. She showed us the inside scoop which undoubtedly led to a more interesting and authentic experience than we would have otherwise had. 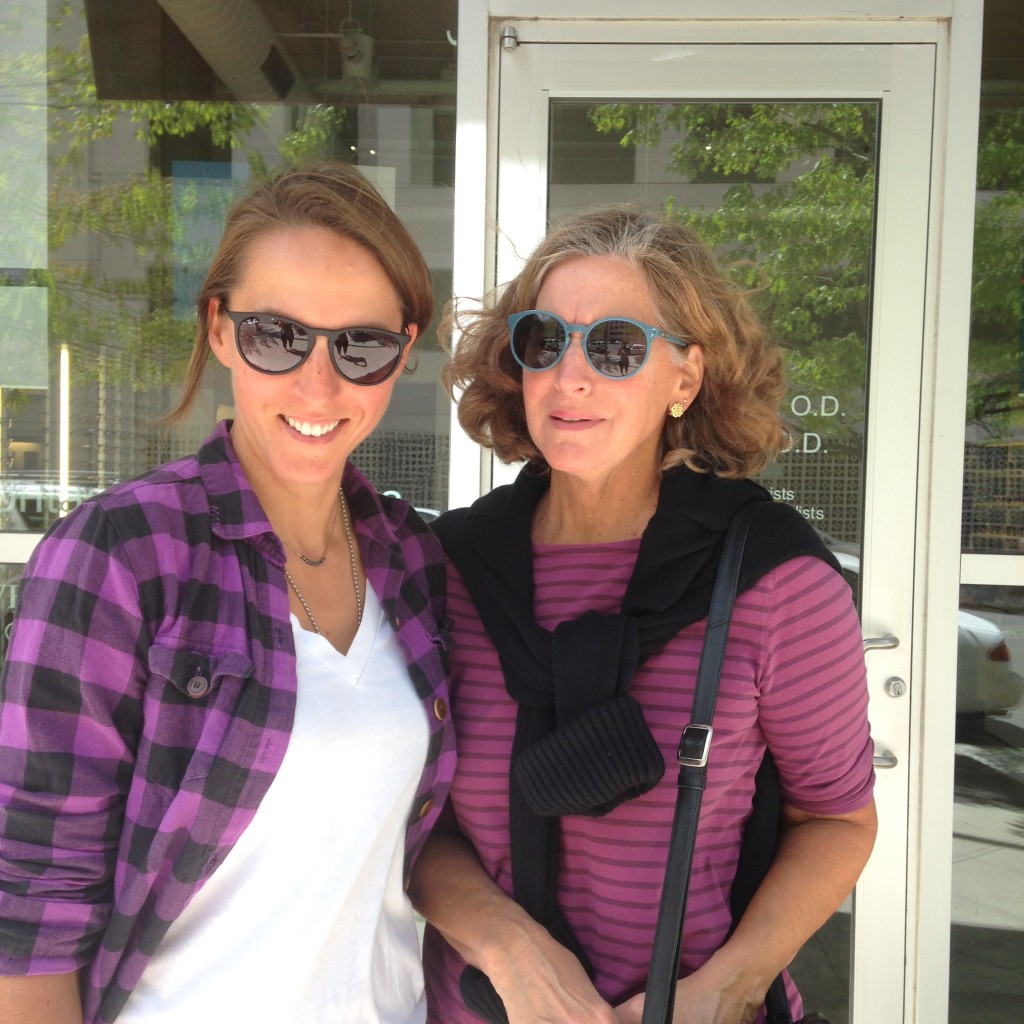 We got Madeleine new shades that, preciously, match those of her mother quite nicely 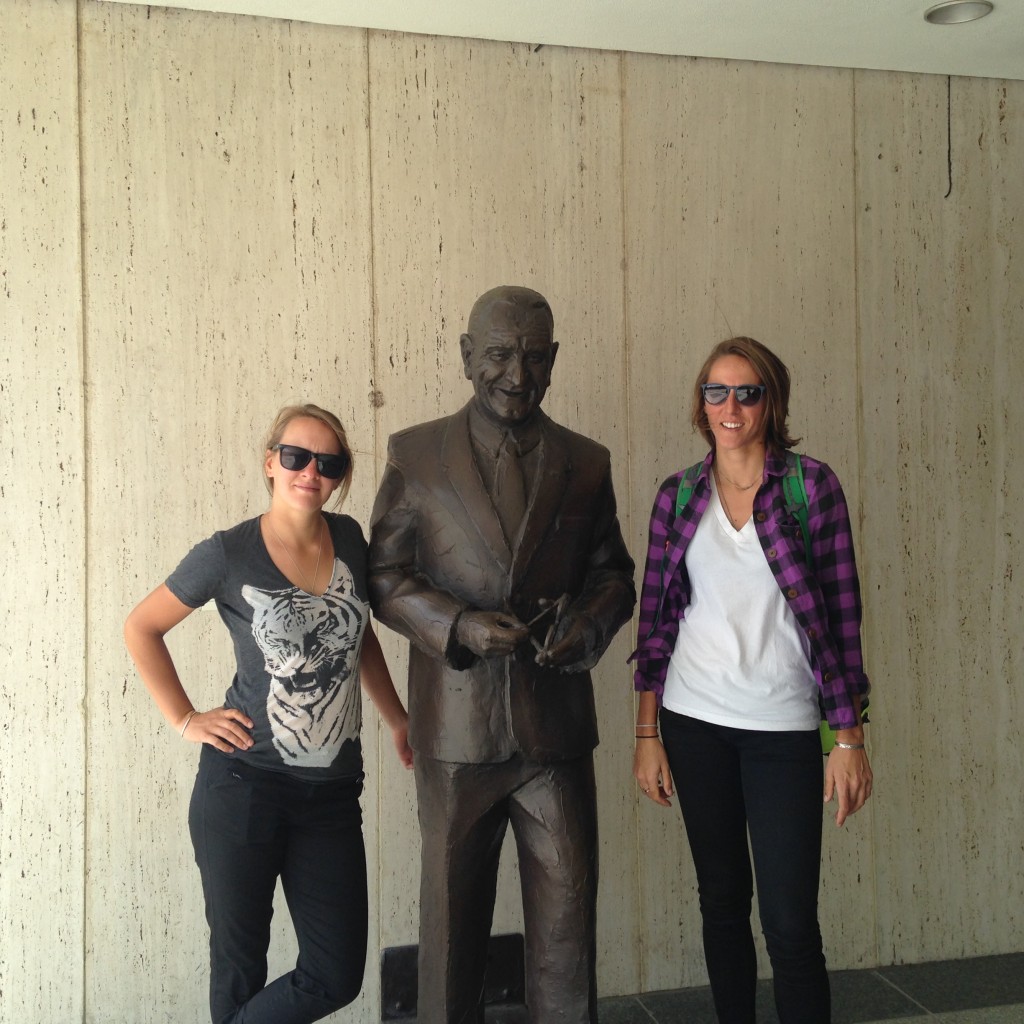 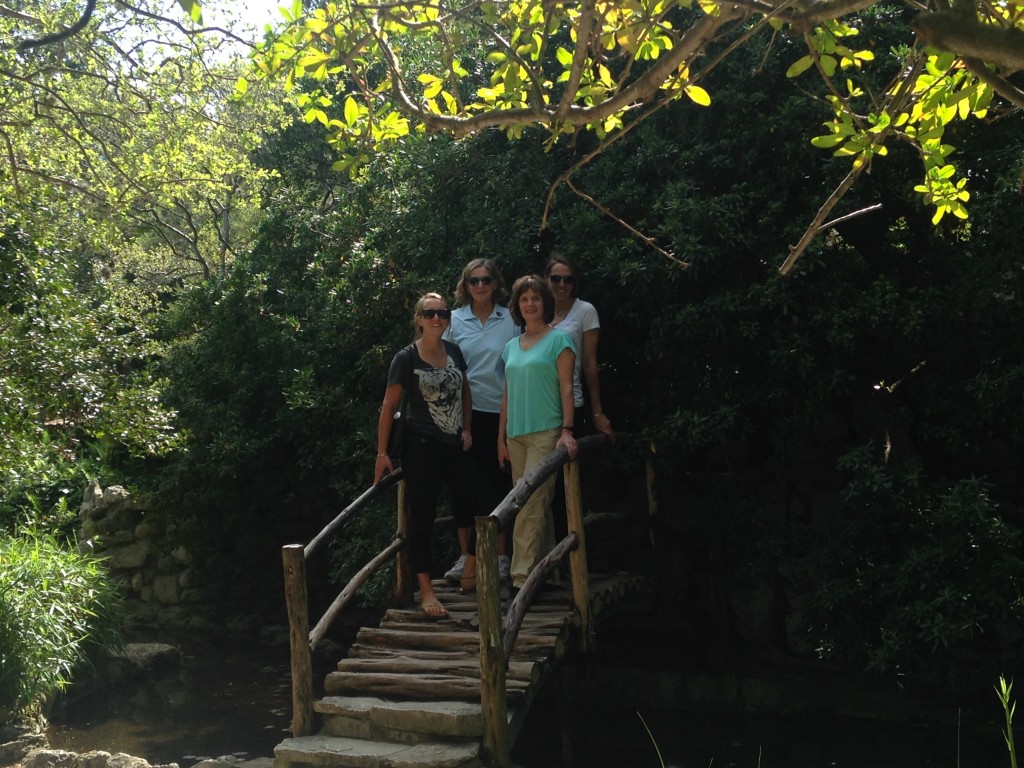 We posed for our portrait at the Botanical Gardens 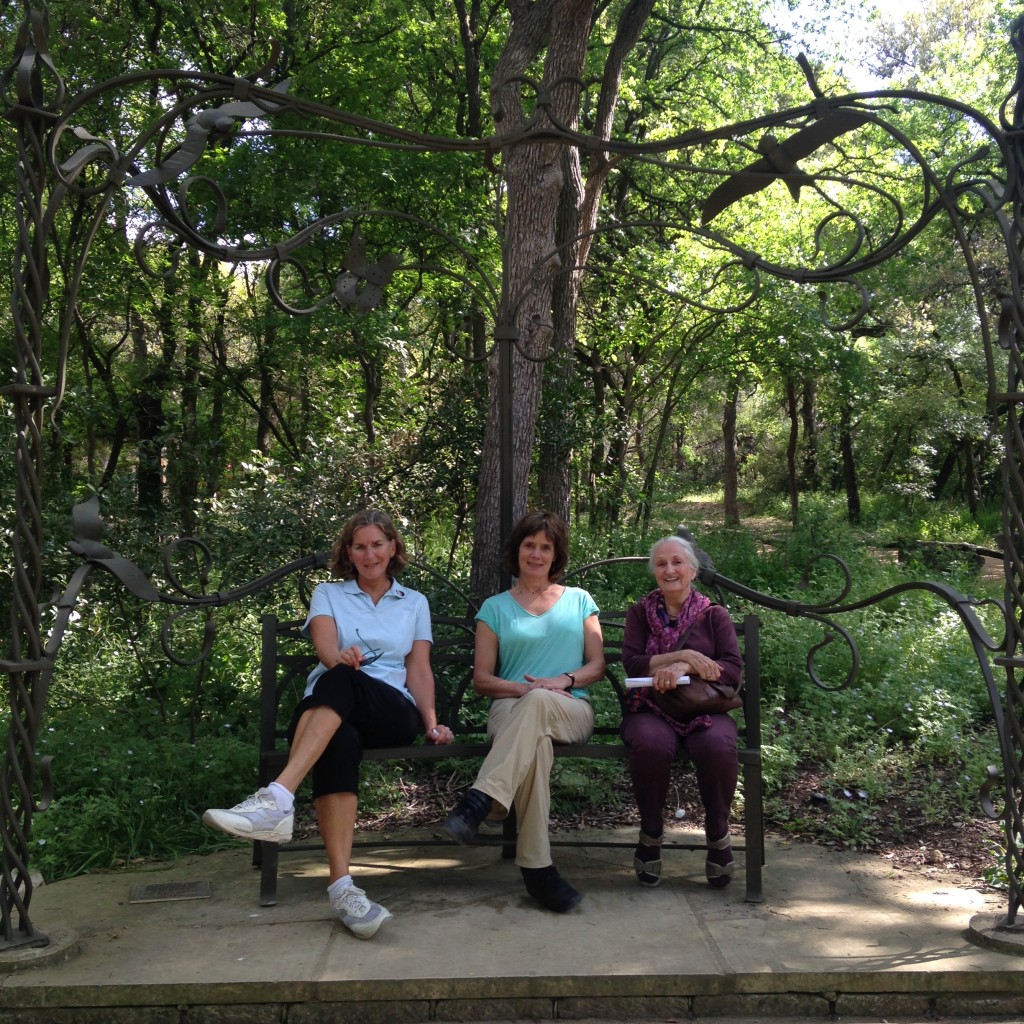 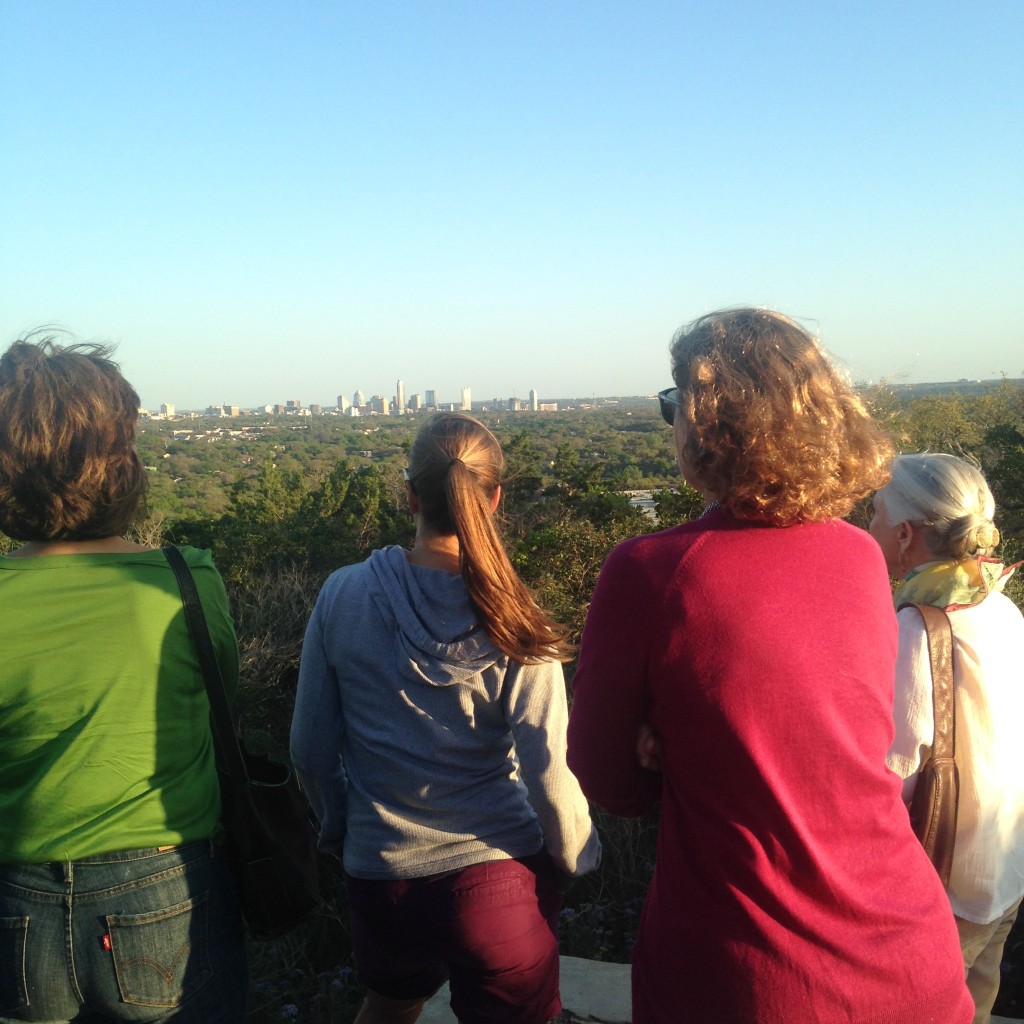 Overlooking the city from the West side

We finished up our stay in Austin with a fun evening out for some local beers and food. All in all we had a great time, and next are antsy to finish up Texas!
Apr 1, 2014 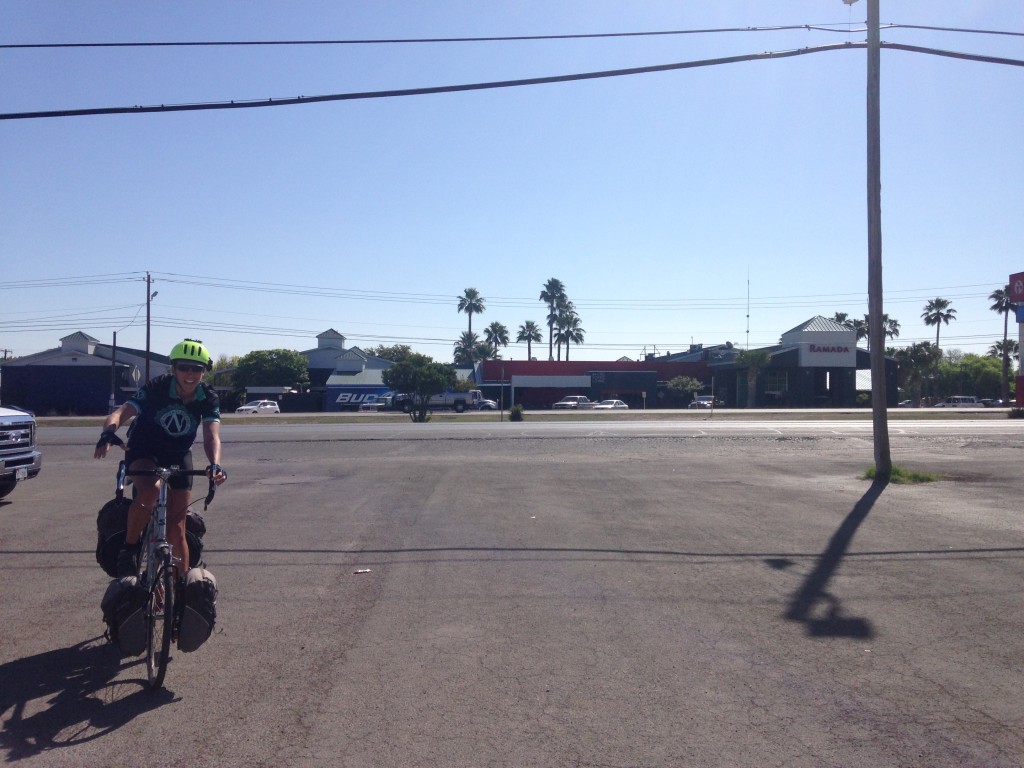 Madeleine clearly excited to be surrounded by buildings and businesses

Heading East out of Comstock towards Del Rio and eventually towards Austin, we were so excited to get to Austin we couldn’t have peddled fast enough. The wind was with us, and as we descended officially out of the high desert and into the green and lake-filled section of Texas, we just flew, finally aided with strong tail winds. Del Rio was the biggest city, town, group of people and stores that we had seen in a long time, and we both felt a strange sense of relief as we started to see the big chain stores that the more scarcely populated areas of Texas we had been in lacked. I never thought I’d be relieved or excited to see Applebees and Shell Gas and Target, and though we didn’t go into any of them it was still exciting to know that the most remote portion of our journey was over.

The last time we had seen green trees and plentiful natural water was San Diego, so going through Del Rio and up towards Austin was almost like nature shock, in the most exciting way possible. Then get closer to Austin, the rolling hills are endless but green and lush and like nothing that I, never having been to Texas previously, had expected.

We were mostly excited to get to Austin because BOTH of our mothers were coming to meet us. They apparently didn’t believe that we are both truly alive and well, so they came to see us in the flesh. We got there as soon as we could.