There is one bakery that’s open early on Dauphin Island, and needless to say we found it this Wednesday morning. After some cinnamon rolls, muffins and coffee, we rode to the ferry on Dauphin Island to cross over the Mobile Bay. A half hour later we were on the East side of the bay and riding on towards Florida. 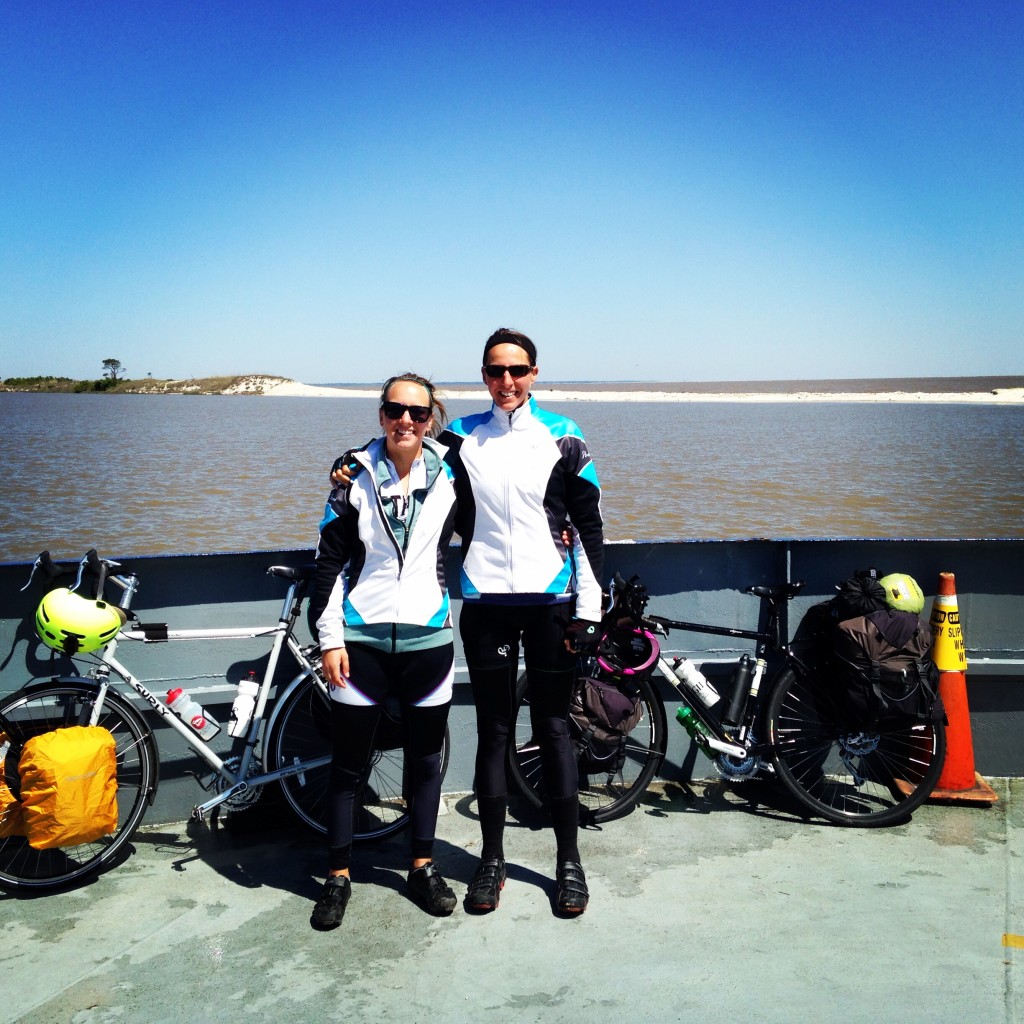 It was a pretty unremarkable day of riding. 58 miles, completely flat, much of it right on the coast. It was beautiful riding along the gulf, all the houses raised up because of frequent flooding. So we peddled from beach community to beach community to strip mall to strip mall. The highlight of the day was the video concept that Madeleine came up with for our Border Crossing video: 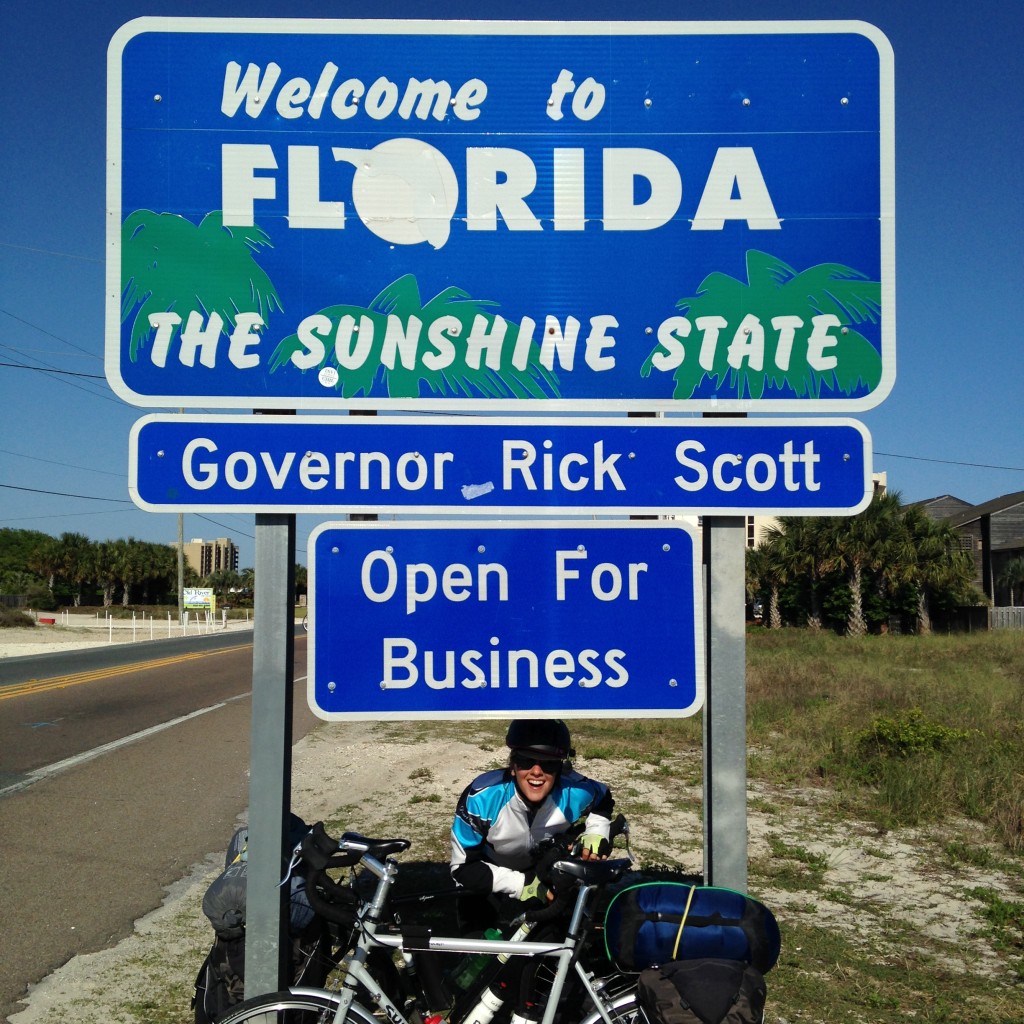 Click the photo for our best Border Crossing video yet – with sound.

We stayed at a Warm Showers that night in Pensacola, at a local Methodist Church. The Director of Communications and Worship Arts at this church is a guy named Jeb, who biked cross country on the Trans America Trail last fall, and upon returning to Pensacola convinced the Church to let him use it as a Warm Showers host. It was quite spectacular. The Church is enormous and has multiple buildings, so we had an entire building to ourselves (which while living in a tent is extra special).

Jeb, our awesome host for the night

There was a torrential downpour / dramatic lightning storm / monsoon the night we stayed in Moss Point, fortunately 100% dry in our motel room. When we woke up it was 40-something degrees and still blowing cold wind, and the storm had caused the wind to shift so that it was coming straight out of the north. We had plans to make it to Mobile, AL this day, which is North of where we were, so we headed out with that plan in mind.

About 10 miles down the road we saw a big colorful sign that read “GATOR RANCH” so we screeched on our brakes and went in for a $5 self-guided tour, and it was AWESOME. They had some baby gators in cages, but more impressive were the giant adult gators roaming around the bayou/marsh, with little walkways that you could explore on. 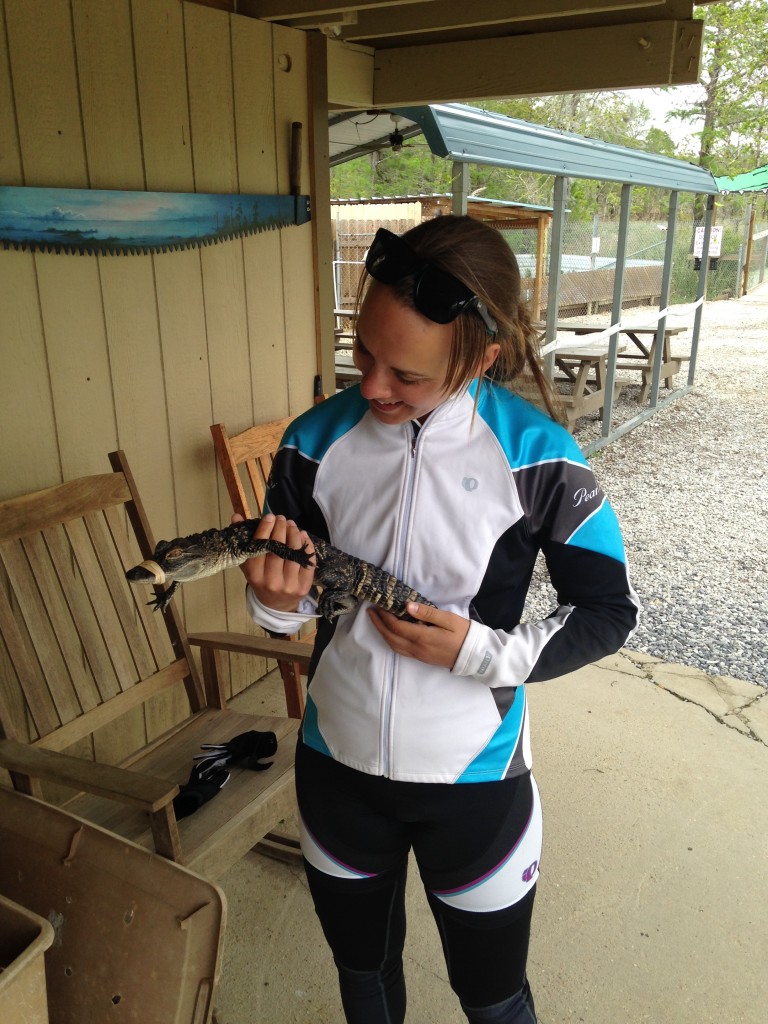 I got to hold a baby 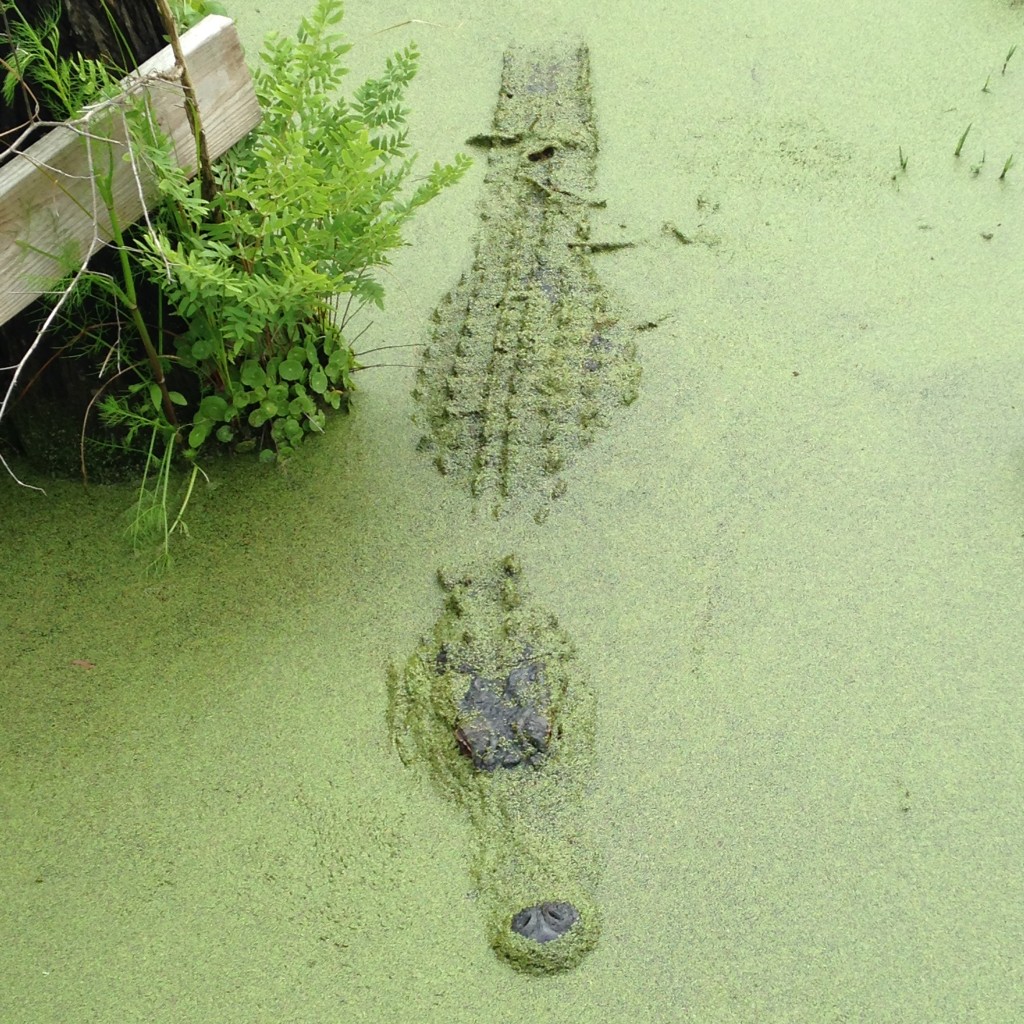 One of the big ones! Click the picture for a video.

When we left the Gator Ranch the wind was still blowing at uncomfortable speeds from the north, so we held a miniature roadside powwow and decided screw it, we never get the wind at our backs, let’s take this as a sign that we’re supposed to go south and just do that. So we did! And it was FABULOUS. We covered 50 miles in no time at all, flying at 16-18mph the entire time. We stopped for the best pulled pork sandwich in the world in Bayou La Batre, also the home of Forrest Gump, and wound up on Dauphin Island on the Alabama coast. 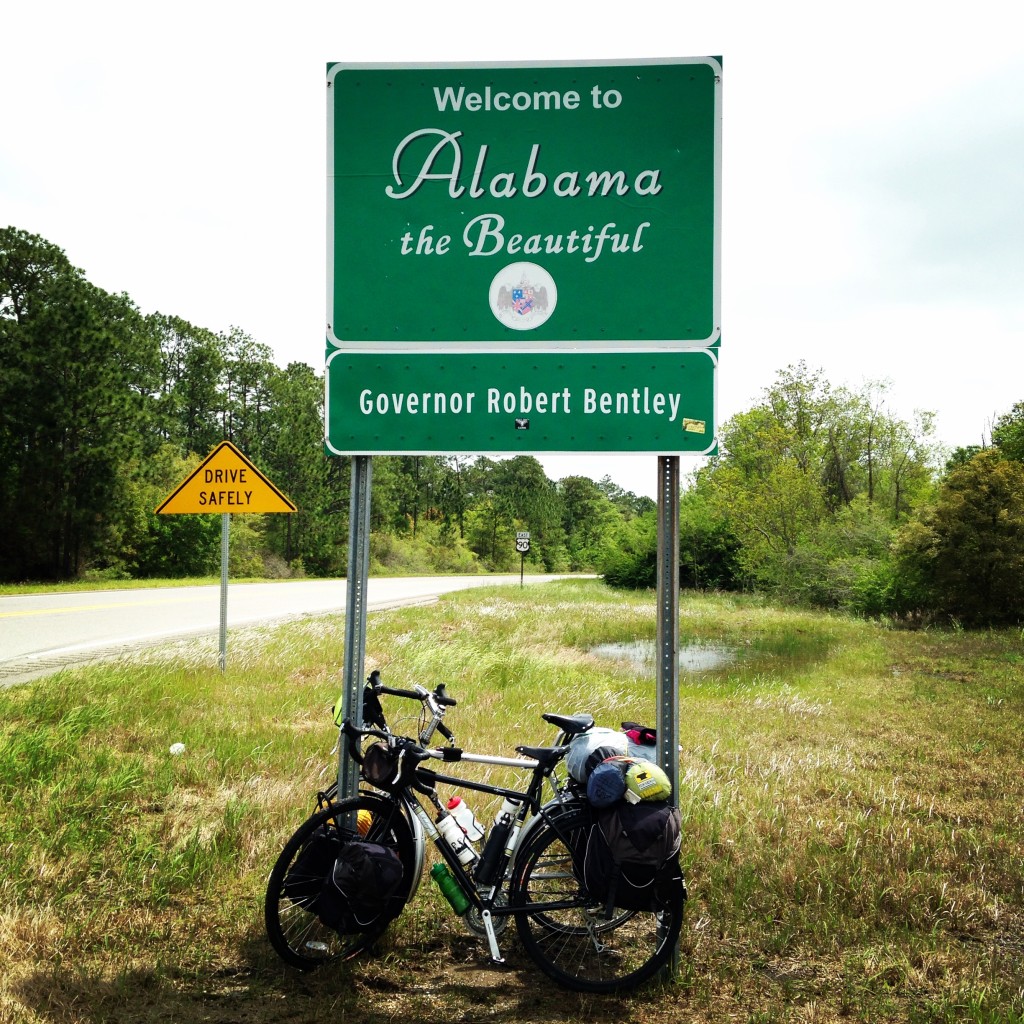 Crossing the border – click the photo for our Border Crossing video

We got to the one campsite on Dauphin Island and set up camp – it was cold and was getting down to the mid-30s that night, so we tried to make a camp fire. Unfortunately everything was a little wet so it wasn’t going so well, so both of our neighbors came over with their gallons of fire starter fluid and torched us up. Making friends everywhere.
Apr 14, 2014

We left New Orleans reluctantly on Saturday. Having had such a great time we were inclined to stick around through the weekend but a reasonably priced hotel room proved elusive. Our sendoff meal was at Cake Cafe, my new favorite place on earth. Riding out of the city ended up being complicated as we navigated some incredibly poorly paved roads and confusing one-way street situations. We rode up through the Ninth Ward and had almost cleared the city when we came to a railroad crossing. A train was coming through slowly and eventually just rolled to a halt. We sat waiting for it for at least 30 minutes. It was crazy. I took it as a sign that we weren’t meant to leave but eventually we got through and rode east on Route 90 toward Mississippi. A few miles out of town we saw a big sign warning of traffic delays the following day because of the Ironman Triathlon that would be running. We thanked our lucky stars that we avoided getting stuck in that. On 90 we noticed a couple guys erecting a “ghost bike,” a bicycle frame painted white as a memorial to a cyclist who had been killed in that location. It turned out that a firefighter from Atlanta was in town training for the Ironman and had been struck and killed by a car the previous day exactly where we were then riding. We were informed of this by several locals at a gas station/restaurant/bar where we had stopped to rest. They were all telling us about the accident and how we should be careful out on the roads. They were all also very clearly loaded and we watched several of them hop in their cars and drive off. I even sat and watched as one guy drove in, went into the store, came out with a 22oz. beer, got in his car, opened it, took a swig, then drove off. Unbelievable. So yeah, that was a pretty gnarly experience. Back on the road, keeping a watchful eye in our rearview mirrors, we rode through the bayous and eventually over the Mississippi border. Dumbfoundingly enough, it is apparently legal to drink and drive in Mississippi (according to both my brother and the internet). As long as you don’t blow a 0.08% BAC, you can operate a vehicle while consuming alcohol. Whoa to that.

Our first couple nights in MS we camped at state parks where there a a million jillion kabillion gnats and I now have an equal number of bug bites. We also visited the Jefferson Davis Presidential Library and historical home, Beauvoir, in Biloxi. Yes, such a thing exists. After getting our history on we hit a local joint which was packed with (mostly drunk) locals having all-you-can-eat crawfish. I decided to join them and, after struggling with the little critters for a while, a local guy came over and said, “You’re not from around here are you?” He said he knew because “No one from around here would ever take a fork to a plate of crawfish.” Then he proceeded to pick up several crawfish off my plate and show me how to peel/shuck them. Southerners are VERY friendly. Anywho, now I know how to eat crawfish like a southerner. On the menu for tomorrow, a swamp tour where we will allegedly get a chance to feed some alligators. Stay tuned!

Riding out in style in our beautiful new STOKED jerseys 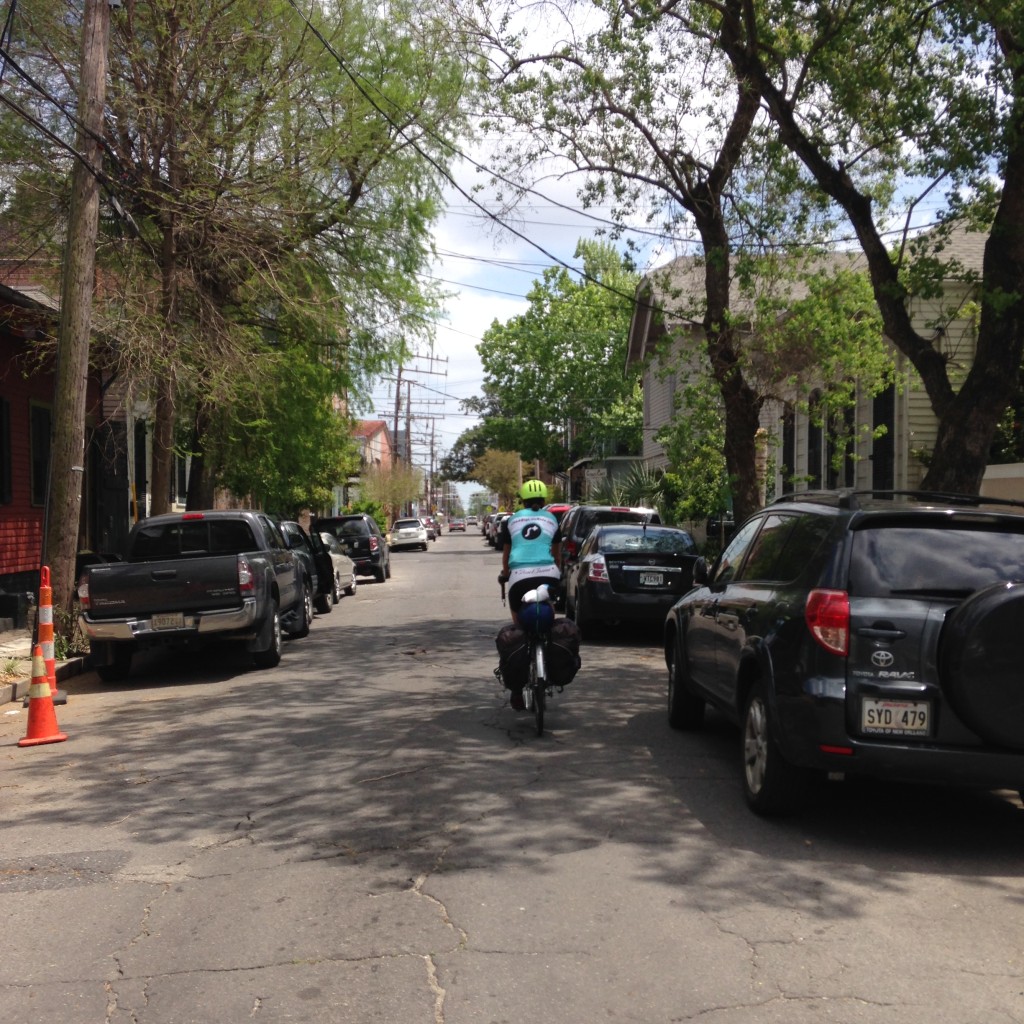 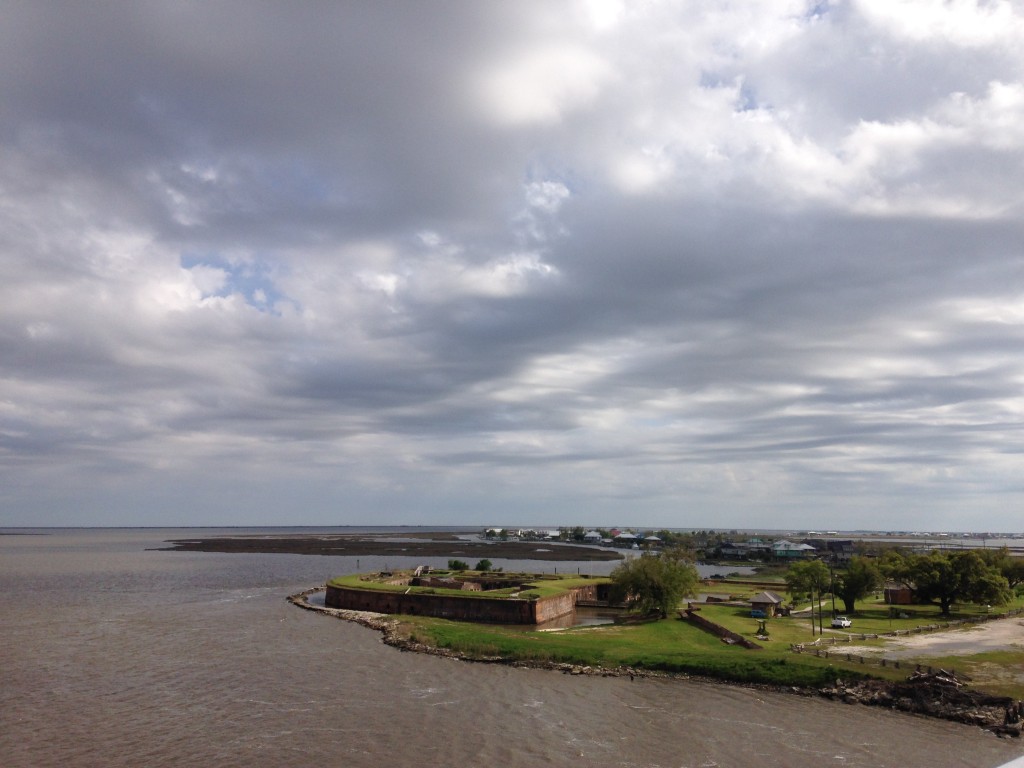 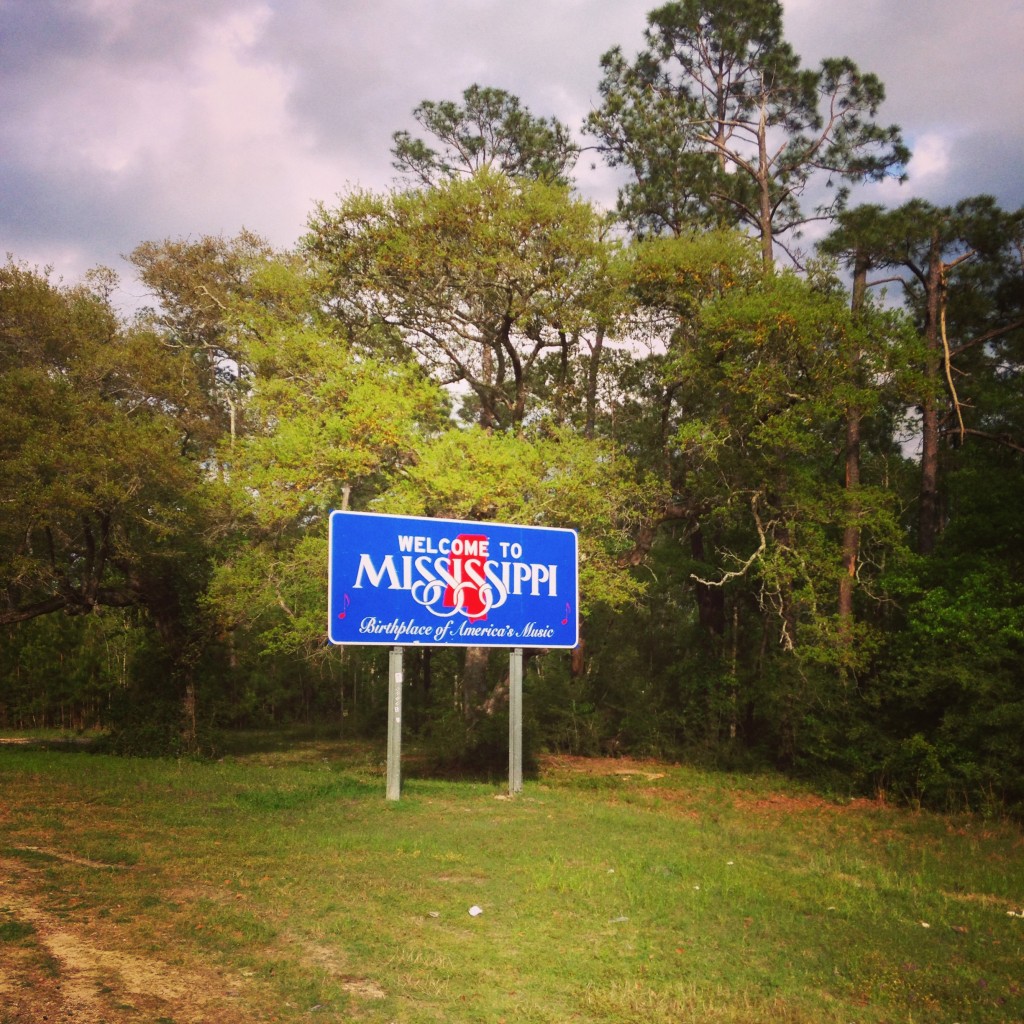 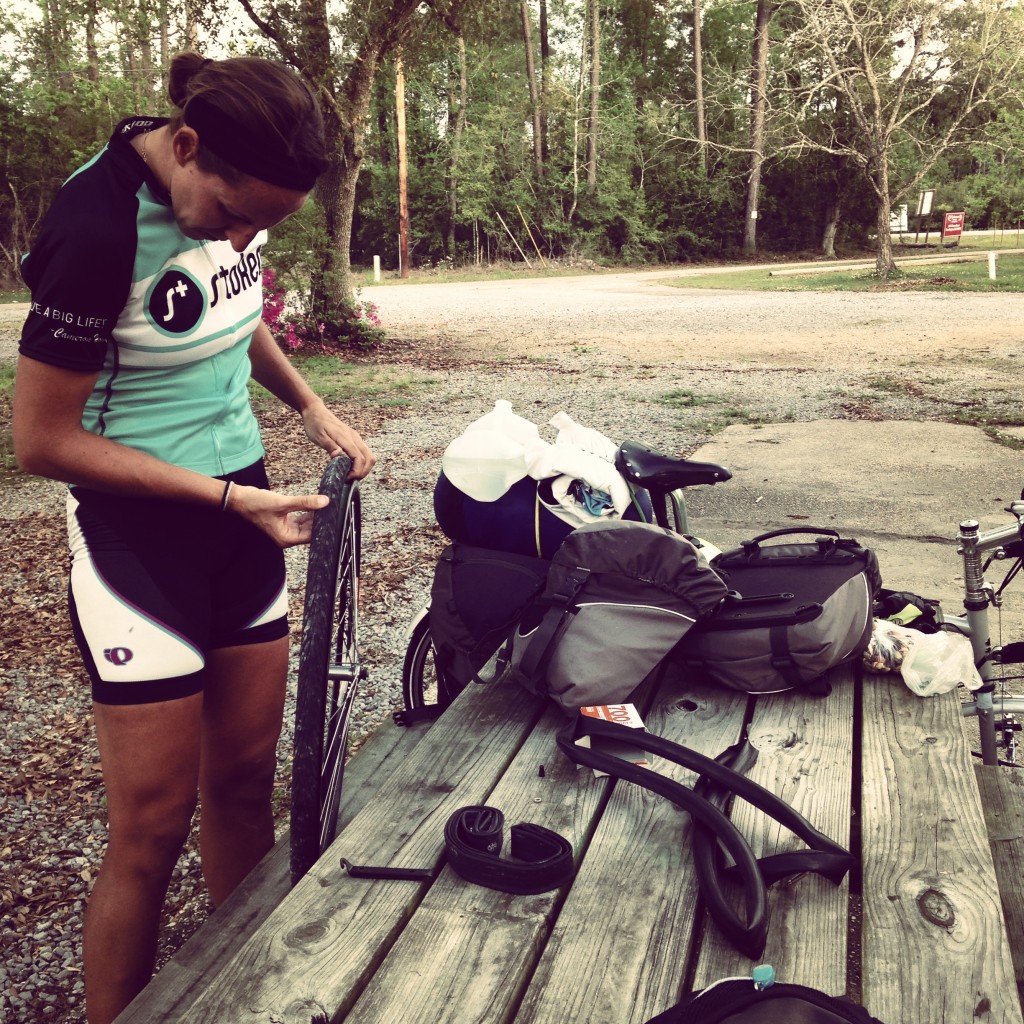 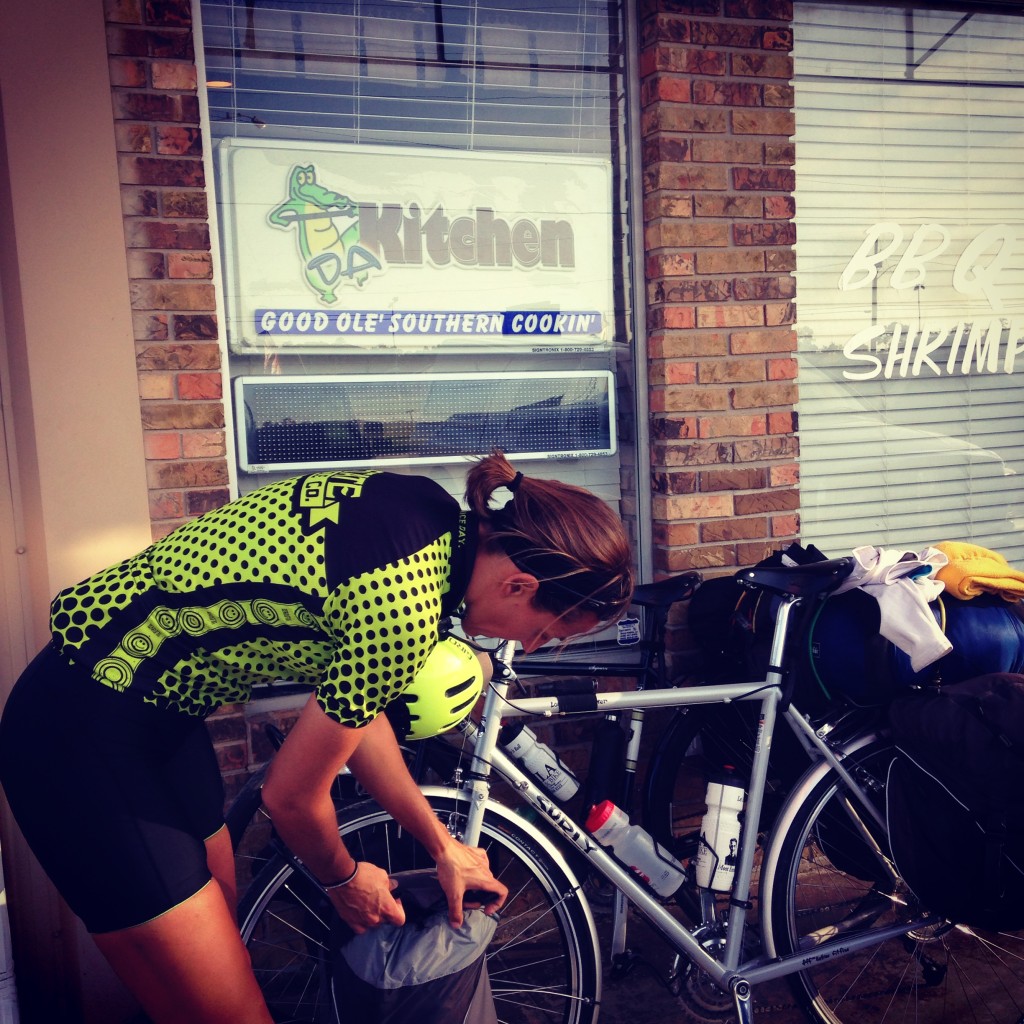 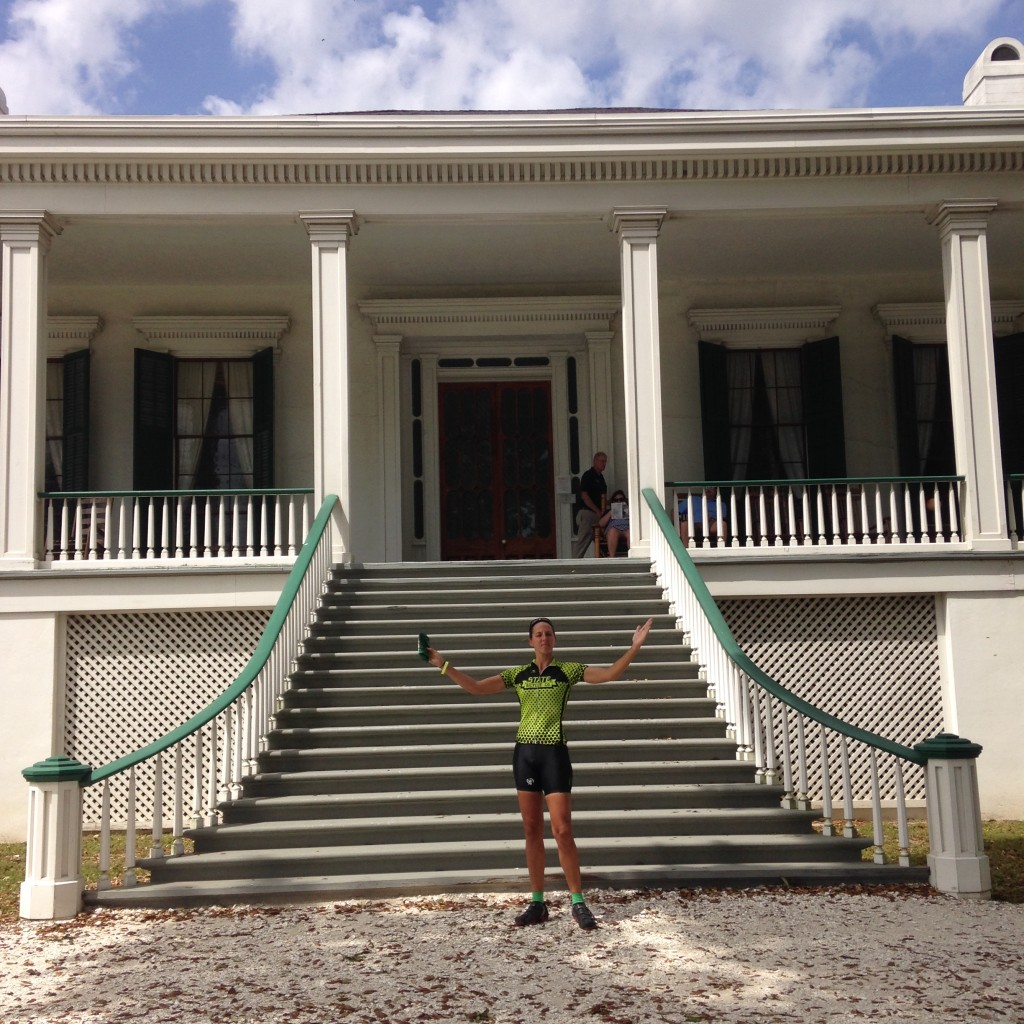 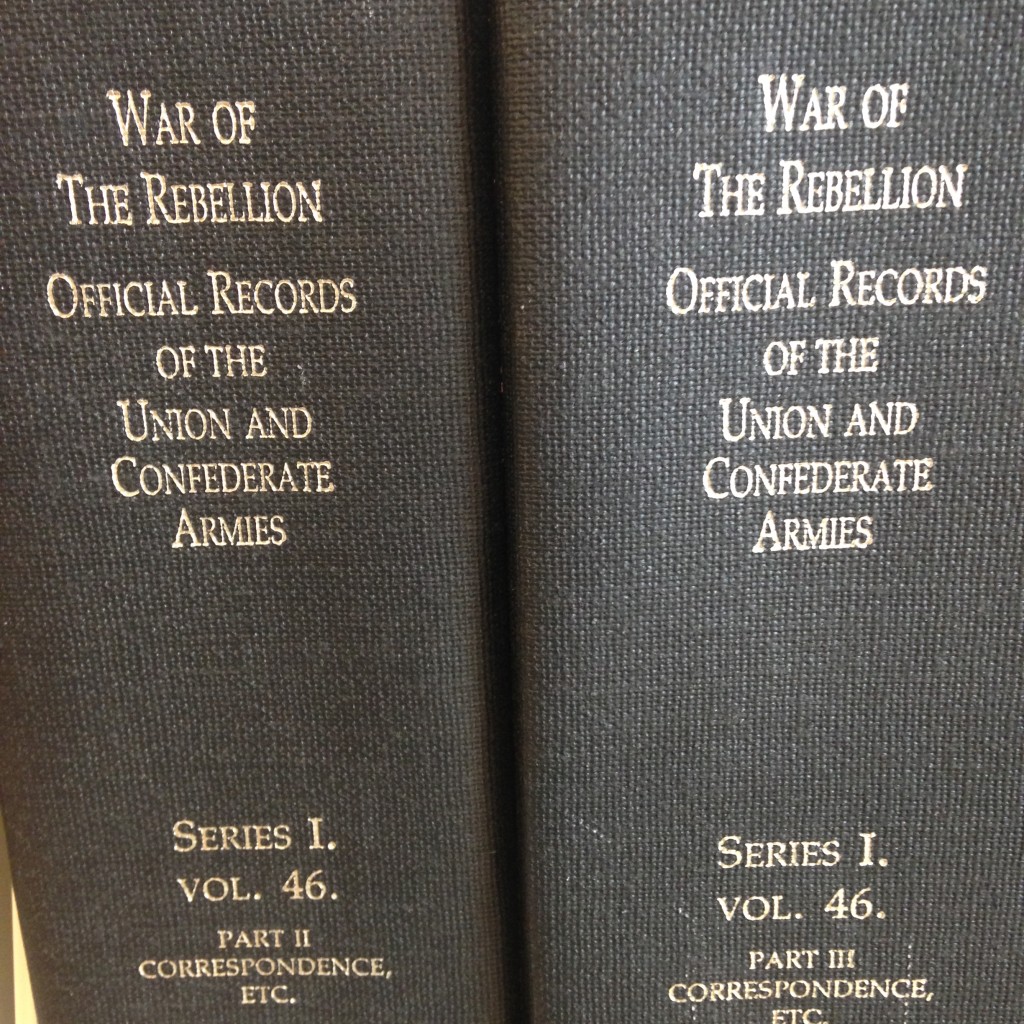 We visited his “Presidential Library” 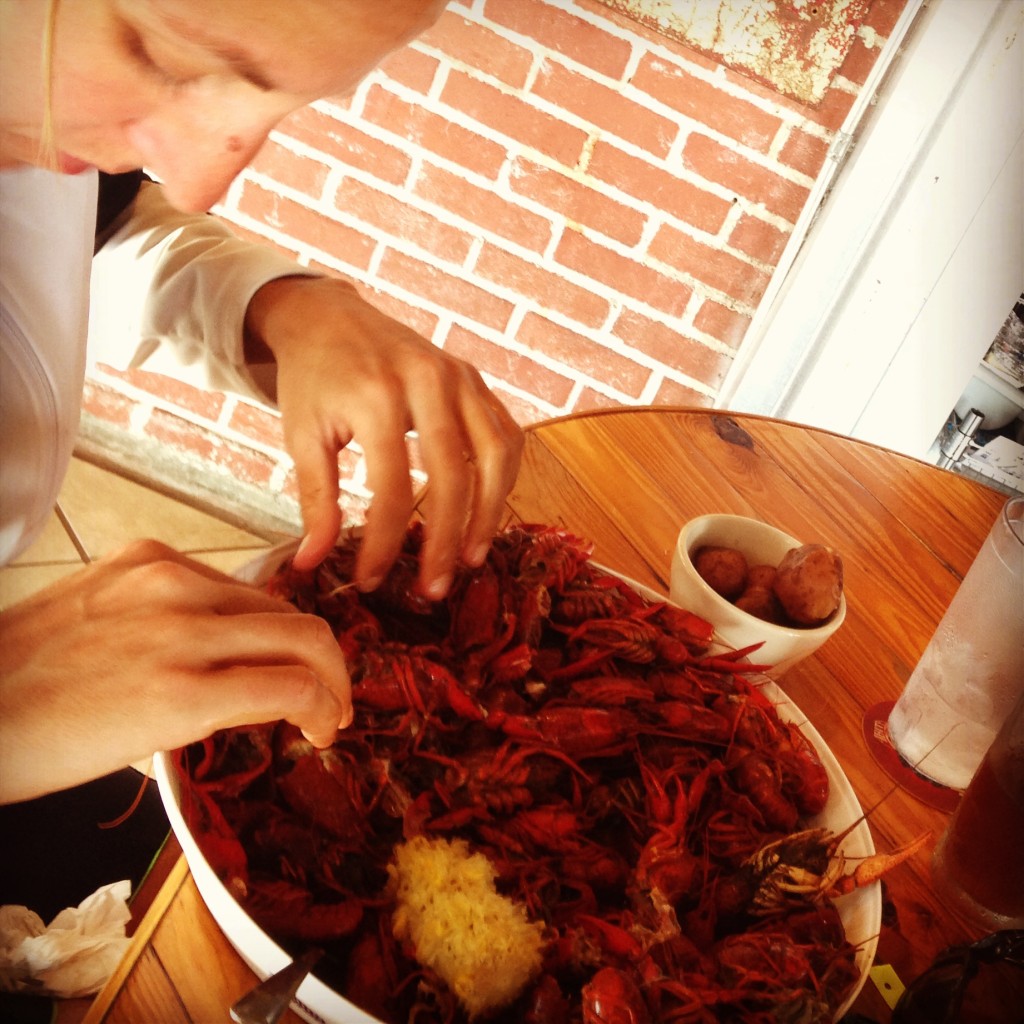 Going to town on our first crawfish experience

Clearly we’re a little behind on the blog so I’ll just skip to the good stuff. My parents met us in New Orleans and it was a total blast! We went to a New Orleans Pelicans NBA game, Sophie and I stuck around for part of the French Quarter Festival and saw Dr. John play, we poked around in all the little neighborhoods and generally ate our way through the city. We ate some of the best food I’ve ever had… every meal. Seriously, we never ate (or drank) anything that wasn’t incredibly delicious. A couple days after we left, Sophie and I were trying to decide what our favorite meal or dish was and we couldn’t decide — everything was so awesome. A huge thanks to my mom and pops for putting us up and taking us out. 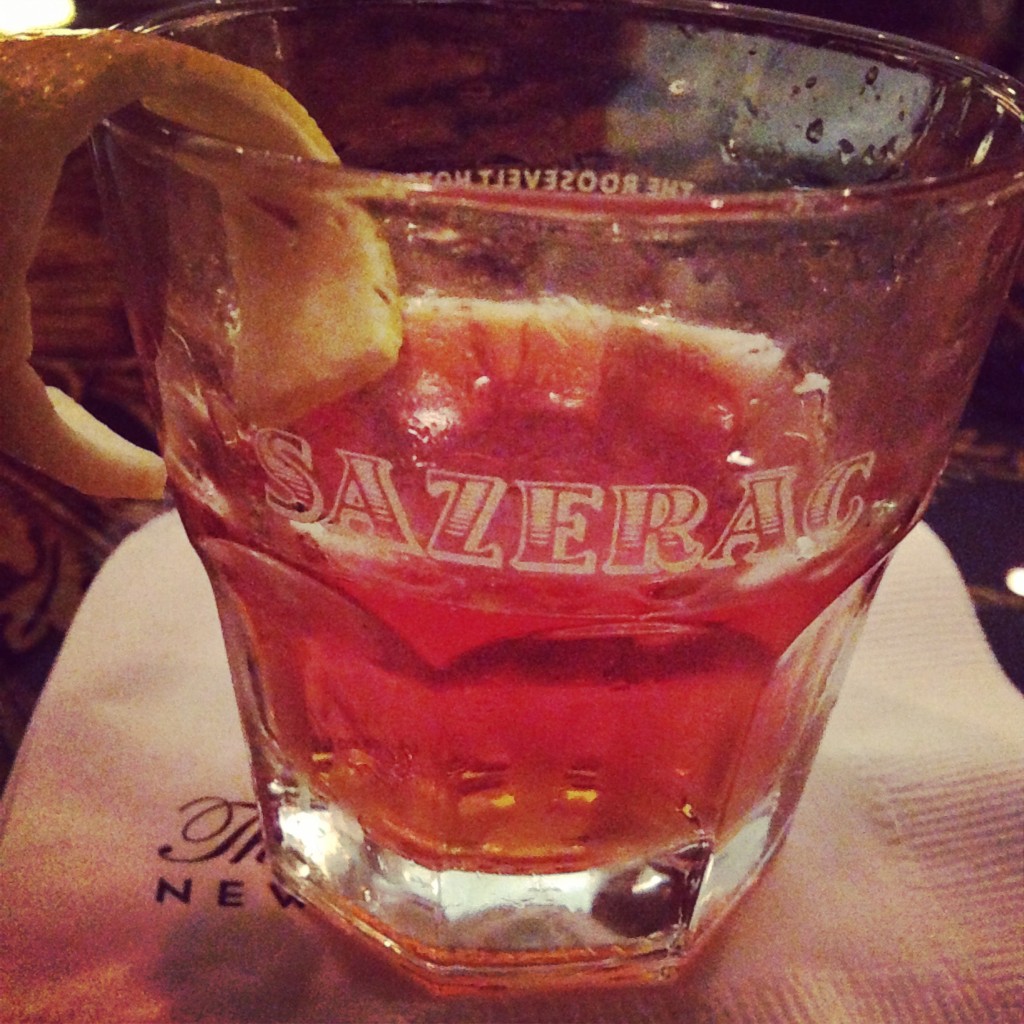 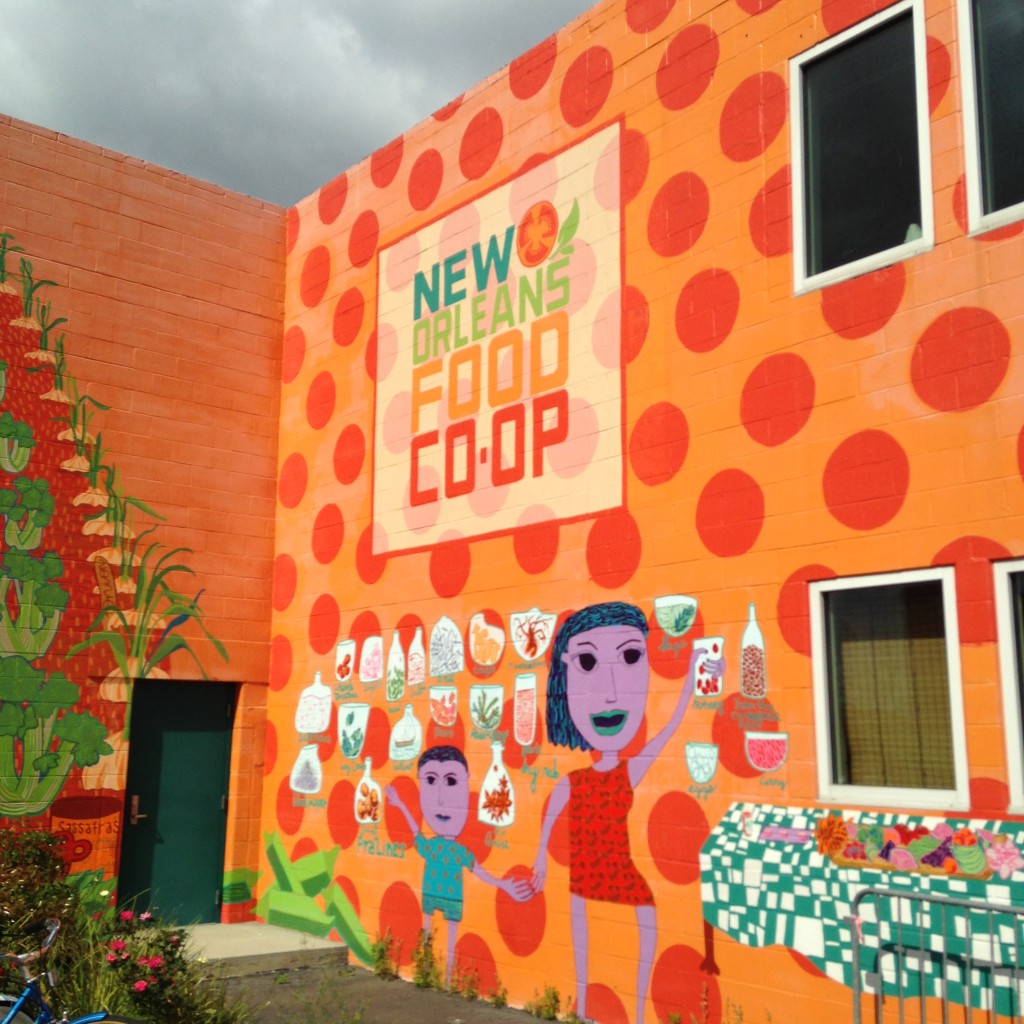 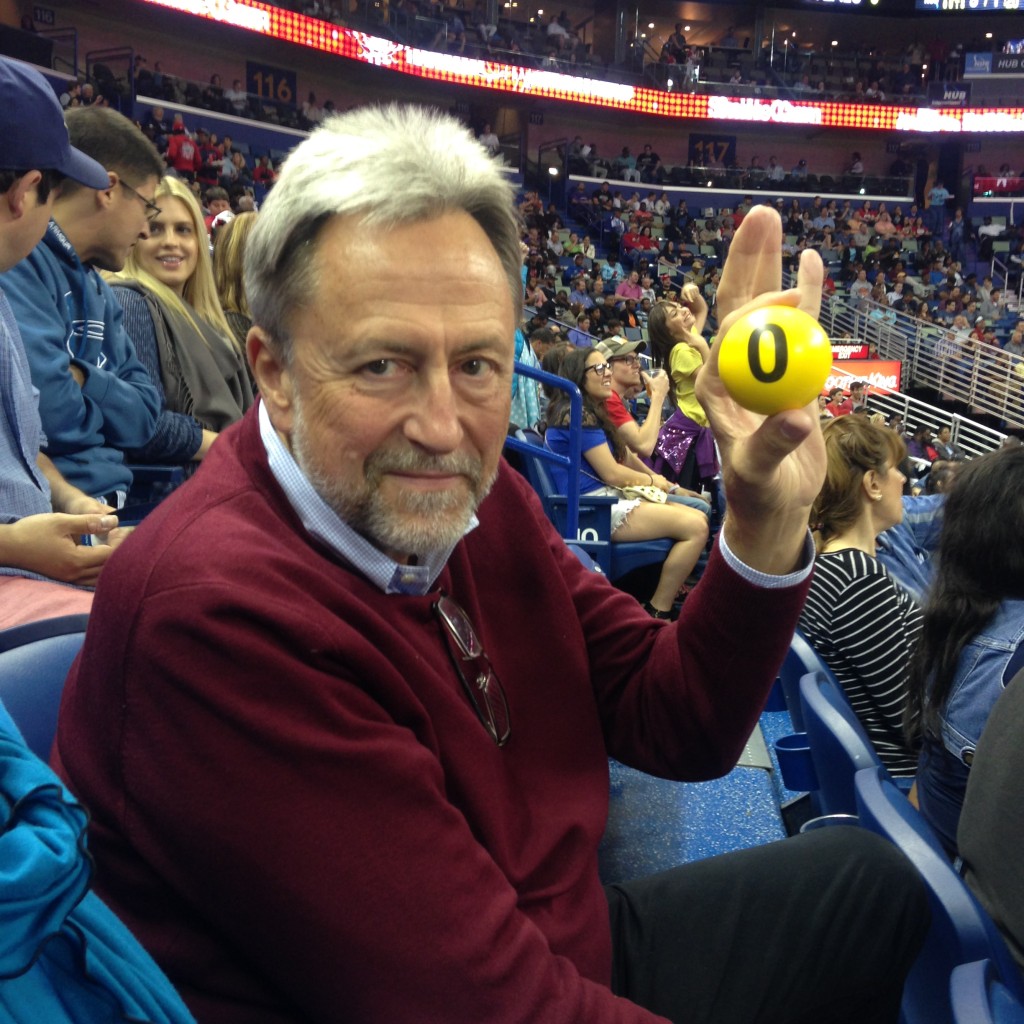 My pops went full Air Jordan over the row in front of us to grab one of the souvenir balls that were being launched into the stands at the Pelicans game. 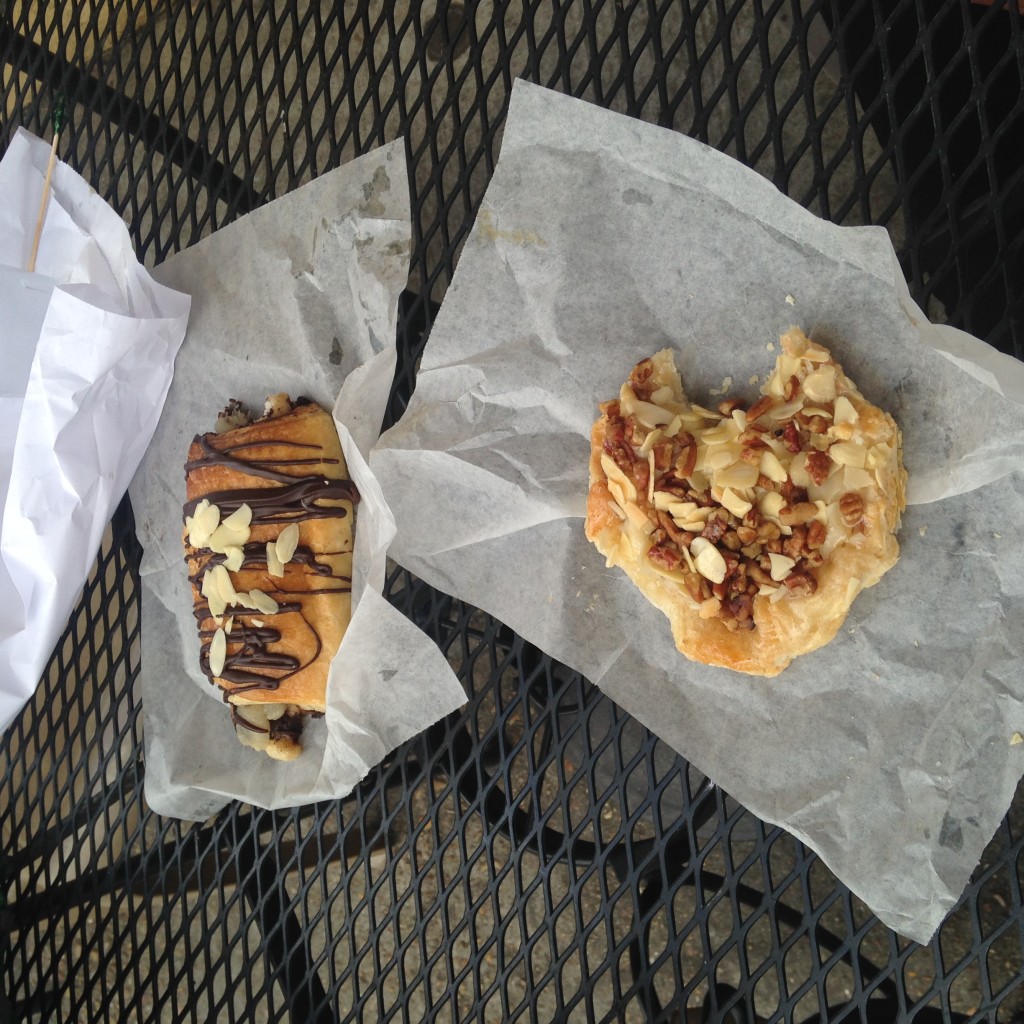 Pastries at Cake Cafe, a spot in the Marigny recommended by Sophie’s brother-in-law and his girlfriend. It did not disappoint. We went twice. 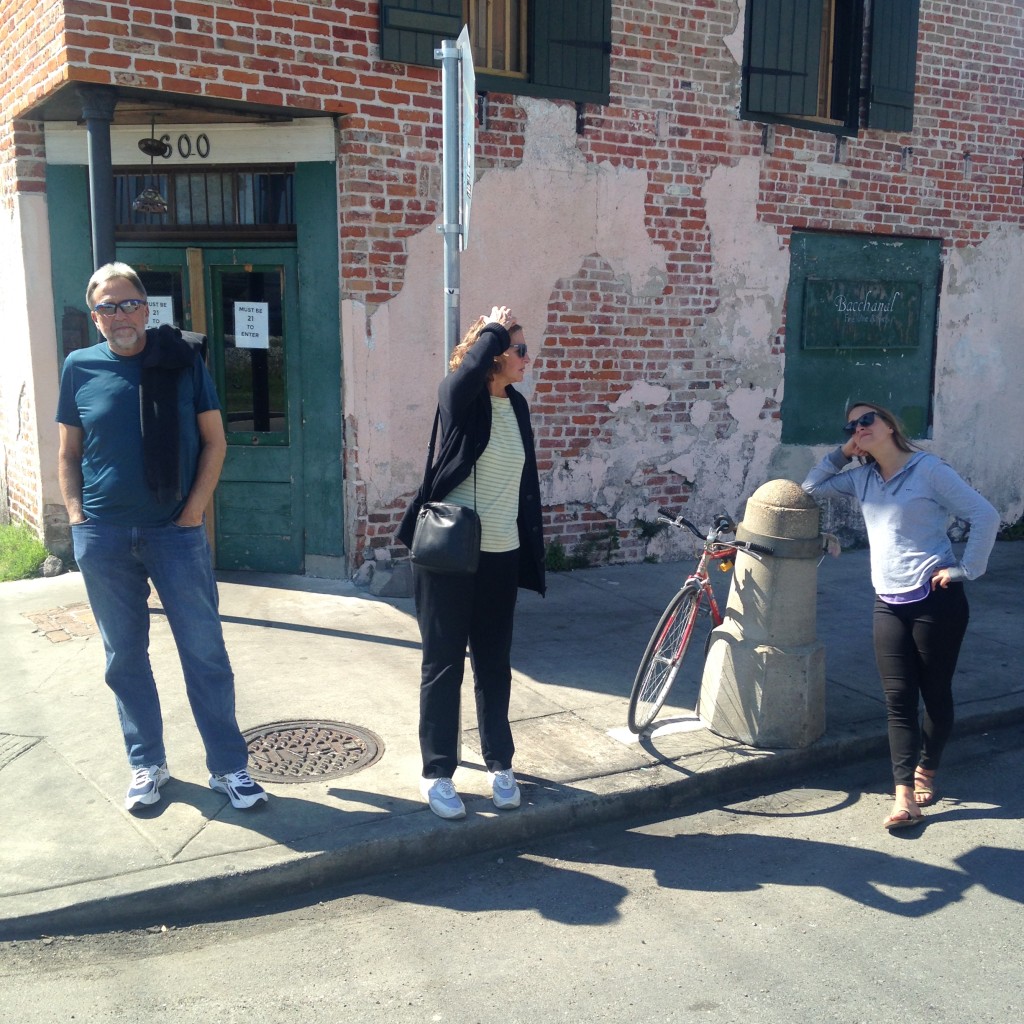 Waiting for a cab outside Bacchanal in Bywater. Absolutely unreal sandwiches. 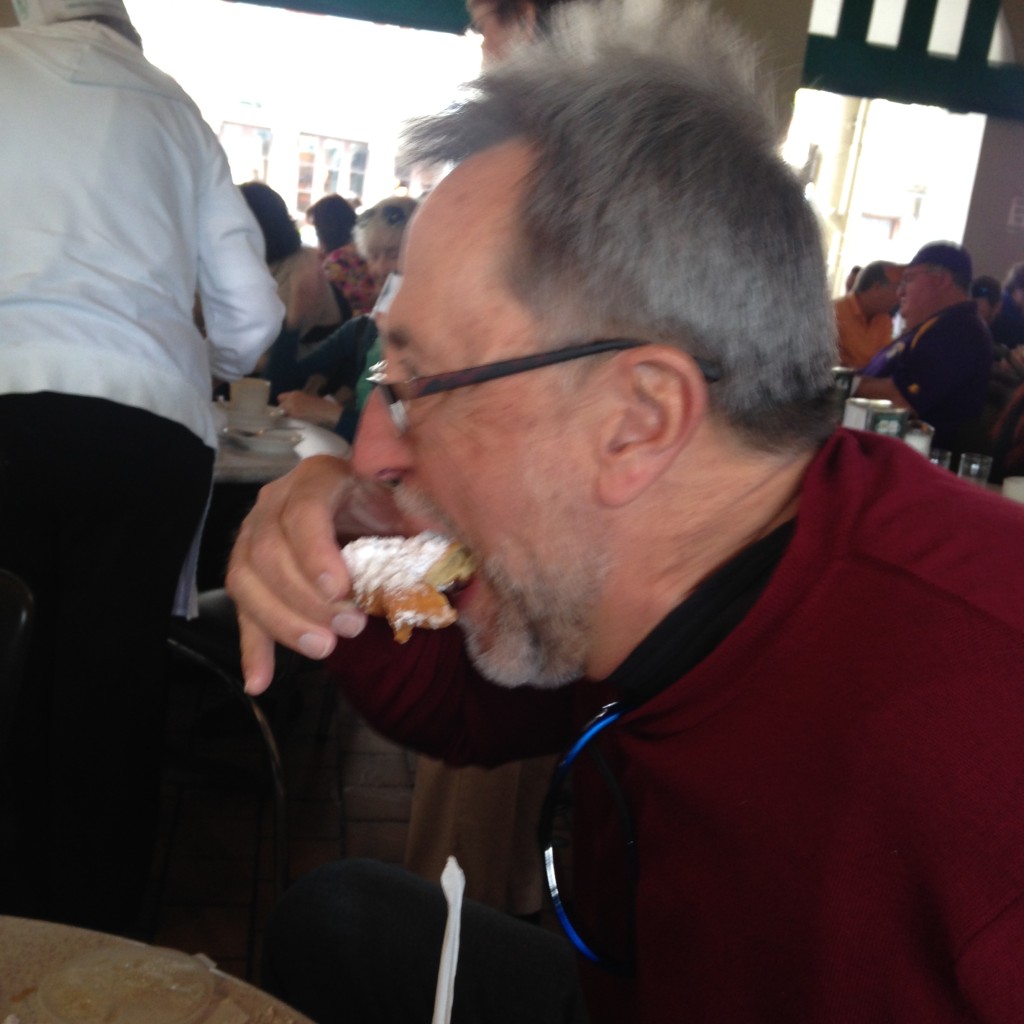 Dr. J going to town on beignets at Cafe Du Monde. We walked away covered head-to-toe in powdered sugar. Totally worth it.

We got a great breakfast in Kirbyville to power us up and over the TX-LA border. It was clearly the kind of place where everyone knew eachother; I watched with ammusement as each person walked in the front door, said hi to the waitress, walked themselves behind the counter, grabbed a coffee mug and poured themselves coffee. Apparently everyone was a regular, maybe one day we’ll attain that status. We eventually were asked what we were up to and wound up having a conversation with the whole place where we receieved lots of our favorite “California?!… New York?!?!” comments and well wishes.

The point is, WE FINALLY MADE IT OUT OF TEXAS. We stopped for a photo and video shoot at the state line, click on the picture below to see our celebration video: 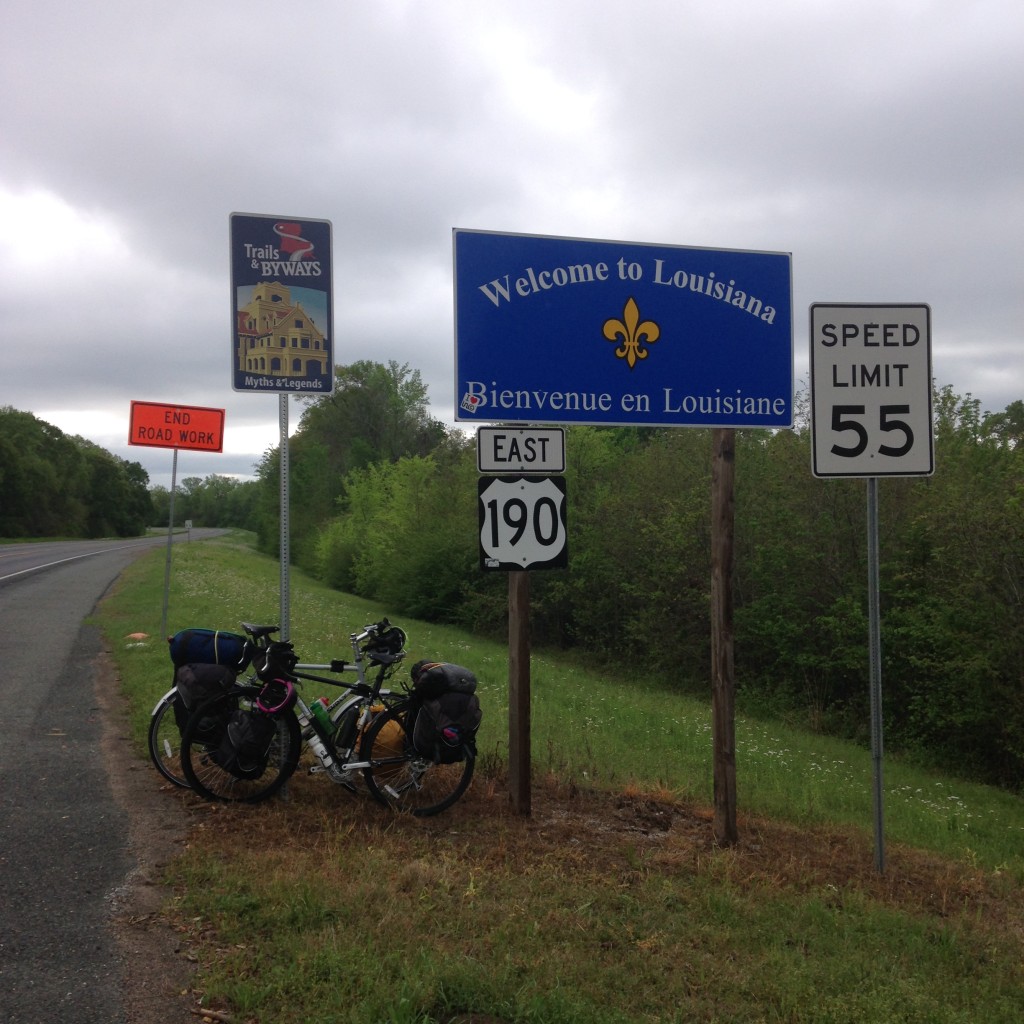